Hearing loss, and its prevention, is a hot and still hotting up topic among musicians. Where concern was once limited to rock players and club DJs who were hitting middle age, now even classical musicians are being advised to get used to playing with earplugs in, preferably from the start of their career, and volumes in (for instance) opera house orchestra pits seem to be causing almost as much concern as monumental PA systems.

I found soon after going pro that a real rock band with a full drum kit and a high-energy drummer needs a lot of volume in monitor speakers to hear what they’re doing, especially in small spaces where the rest of the band might be practically sitting on the drums. Kindred Spirit use in-ear monitors when playing as a full band and supplying their own PA, which is really another story, though IEMs do effectively double up as monitors and earplugs. For all other purposes, I acquired a pair of off-the-shelf ‘guitarist’s earplugs’ – supposed to bring the volume down without cutting you off entirely or distorting what you hear too much. They have served me well for rock gigs, but I found that if I was being blasted by (say) an over-zealous trumpet section right behind my seat in the violas, I could only really play with one of them in – otherwise in really quiet passages I couldn’t hear myself at all, which is definitely a bad idea.

Since moving to London, I’ve also acquired some cheap block-everything-possible earplugs, intended for flights. I wouldn’t try and play with these in, but they are useful for making the intermittent screech of wheel and rail in the deep Tube bearable rather than torturing, and for slightly improving chances of, say, zoning out particularly annoying conversations on the train, or getting some sleep at a festival.

The gold standard, however, has always been something made for the purpose – earplugs not just designed to filter sound in the way a musician needs while playing, but specifically to the individual’s ear canal and current hearing response. They have been around for a while, but it’s not at all long ago that they only could be got by personally stumping up a couple of hundred pounds. This would have been another thing that just wouldn’t have happened till the mythical point my musical income rose, the proportion of it spent on music expenses fell, and I felt I could invest in music more freely.

Enter the Musicians’ Hearing Health Scheme. In partnership with a private hearing clinic and the Musicians’ Union, they provide very heavily discounted assessment appointments and custom-made musicians’ earplugs. It’s particularly cheap for MU members, but for anyone else who meets the criteria the total still only comes to £44 (including a £4 postage charge which remains hidden until relatively late in the process).

The criteria are important, and slightly opaque, though it boils down to having to be a professional musician (at a guess, MHHS is registered as a charity and its goals are limited to pros). In my case, I filled in a form with MU number, website, recordings / videos / social media and a referee contact. I got an email somewhat later announcing they had ‘been unable to assess your eligibility, based on the information you supplied in your application’. It therefore went down to my referee making a persuasive enough case for my professional status, which she evidently did (thanks Elaine!). Maybe they should have asked for my tax return instead (which, for some reason, they didn’t).

In any case, I progressed to the appointment in Camden (with a very private medicine non-urgent lead time of under a week from when booking to first appointments available). This had essentially three phases:

It turns out, in fact, that my hearing is pretty good – still within normal range, though that is no reason not to continue to be at least as careful as I have been. After all, I want to hear well enough to play classical music to a marketable standard for something like the next 50 years …

The plugs arrived a couple of weeks later. 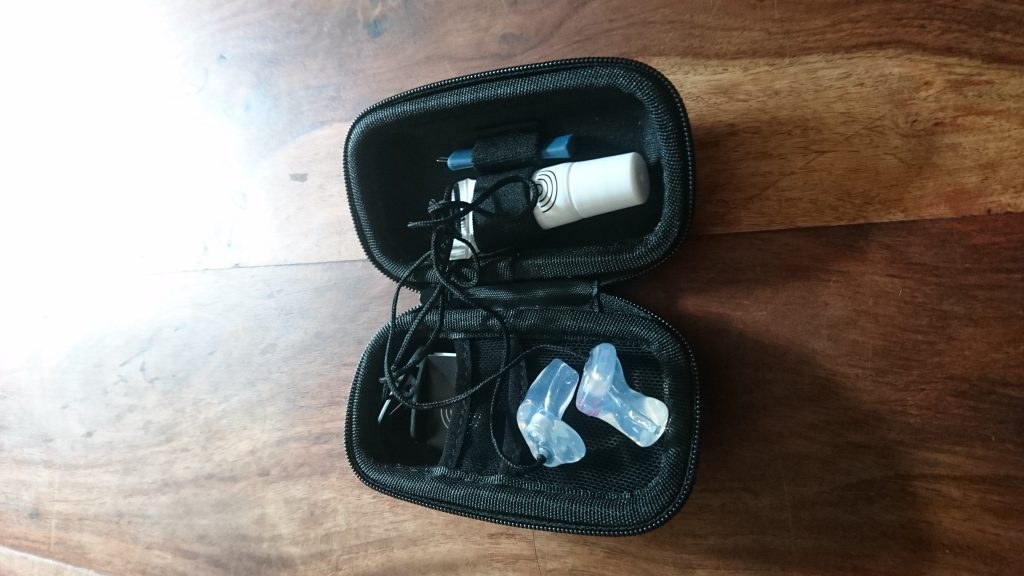 The principle is that they fit so snugly they block the ear canal entirely, the only sound reaching the middle ear coming through the filtered sound canal down the middle. I had opted to get mine on a piece of string (which itself comes with a crocodile clip) to hang round my neck if I need to take one or both out; anything that makes me less likely to lose the things is worth having! The carry case, ear lube (yes really, though it isn’t called that) and sound canal dewaxer (which sounds like a mythical Swiss Army knife blade if ever I heard one) are standard.

I’ve so far trialled them doing a bit of practice; busking for a couple of hours; and doing a gig with Caravan Circus last night. Not even the last of those was loud enough to really need them, but it’s generally recommended to get used to playing with them in, and the more likely problem is struggling to hear quiet sounds rather than loud ones still being dangerously so. In that sense it was a good trial.

The trickiest thing is probably actually getting the plugs in my ears properly! I’m getting there, but of course there’s only way round they will go in properly, and I think there are still two ways round the outermost portion might fit with my external ear cartilage. A certain amount of pushing, twisting, screwing and being willing to pull it out and start again is currently necessary, but I’m sure I’ll get used to it soon.

Once on, I certainly didn’t do any cringing from a relatively quiet gig (no drums, and a decibel meter set with a 100dB trigger, which is pretty quiet for an amplified gig). On the other hand, I could have a perfectly normal conversation, and hear what I was doing quite adequately. I did realise that when wearing the plugs, a particularly large proportion of what I hear of my own playing has in fact been transmitted through the chinrest and, beard cushioning notwithstanding, through my jawbone. The drop in apparent volume if I lift my head away from the instrument is perceptible! It also seems to me that they do stifle certain frequencies of the very complex bowed-string sound waves, giving the impression of a duller and flabbier tone quality than I usually create for an unfiltered listener. Unless I was having a particularly bad busking session, which given how much I earned seems unlikely.

In any case, a little more getting used to should see these become a valuable and fairly trouble-free part of my musical kit bag – and with a lifespan of 4 years before I’m expected to need to get another round of tests and see about a new pair, I can hardly complain of the value. I recommend having a try yourself!