Friday’s Dream Logic gig allowed me the first chance to use a new musical toy in anger: 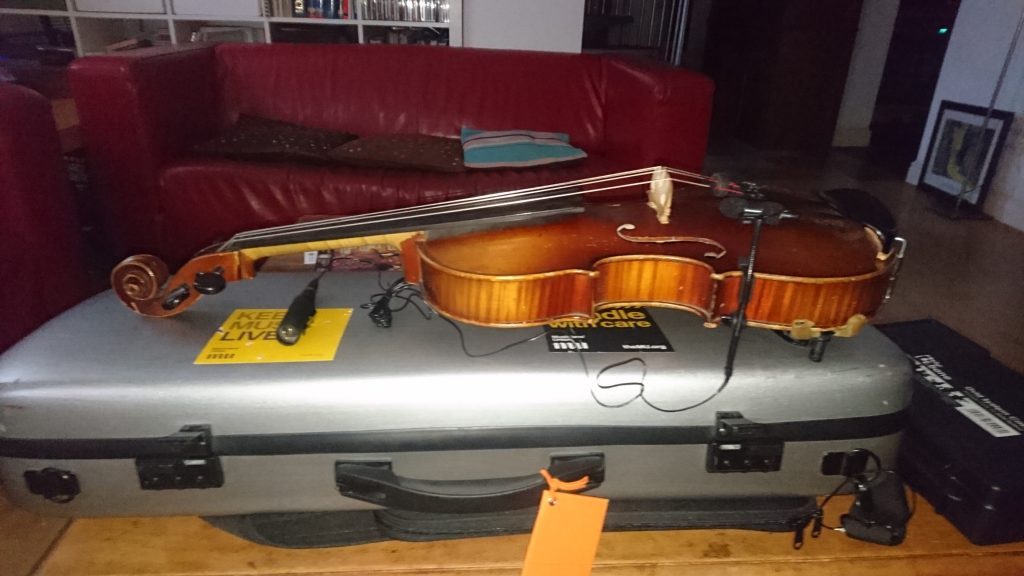 No, I don’t have a new and better viola (I wish! though I am very fond of this one) – look closer.

Adam’s musical conceptions require the string quartet to be amplified – partly because we mostly play everything-through-the-PA gigs at much more than acoustic strings volume, but also because at times they, like the rest of the musical material, are fed through effect processing such as monumental reverb. Despite sometimes altering the sound, Adam is nonetheless the only one of my non-acoustic colleagues / clients to be sufficiently choosy about the quality of acoustic string tone to reject both electric instruments and contact pickups out of hand (I even tried the Fishman on my violin on him once; he wasn’t a fan!). Our first gig revealed numerous problems with playing into stand mikes, from massive spill if the front of house is filling the whole venue with sound to being unable to move to get a better sight-line without the level fluctuating wildly (most of these weren’t new to me). The acceptable compromise appears to be clip mikes, which at least move with the instrument, pick up far more of one’s playing than anything else, and if fixed on quite consistently are quite dependable.

It look literally one gig for me to decide I wanted one of these of my own! Not least, I’m reluctant to attach a pickup to the viola permanently because the majority of what I use it for is classical jobs, in which some people can be a little snobbish about non-classical work (or condescendingly curious and enthusiastic, which is almost as bad); but, it is good to have the equipment to back up the ‘acoustic or electric’ claim on all my serious instruments, and viola was the last piece of the puzzle. Perhaps having a recurrent gig where I could use it merely constituted a good excuse for getting something I wanted anyway. I’m sure I’ll find other pretexts to use it!

The set above – mike with built-in wire and separate adaptor to ordinary XLR connector; adjustable clip; carrying case – is a Thomann own brand under their T-Bone trademark, and cost me 70-odd quid (Thomann, while very useful, are a German supplier and their de facto prices vary both with the sterling-euro exchange rate and with what your bank charges for foreign currency transactions). They brand it as the ‘Ovid’ system, which given much of the works of that Classical poet are pretty disturbing as far as I recall I’m going to hope refers simply to its ability to ‘metamorphose’ an acoustic instrument into an electroacoustic one. It seems to me do everything it should, though it may be still a work in progress – in the few months between Adam’s research and mind, they expanded the ‘violin’ clip from one that wouldn’t go quite wide enough for the rather deep body of my viola, to a much bigger dimension with about a centimetre to spare. My only personal criticism would be the very thin and flimsy-seeming output lead, which would be long enough to take to a stage box or DI box if I trusted its robustness, ending in a mini-XLR connector I have never seen elsewhere (but which apparently dovetails with T-Bone wireless belt packs. See what you did there. Been studying Apple have we?). The effective result is a need to wear a heavyish metal lump at one’s waist (at least the adaptor has a belt clip!) with a long conventional XLR lead beyond it to whatever you are plugged into, and a bundle of unnecessary fine wire between it and the actual pickup. However, it’s a small price to pay for something that is significantly cheaper, and yet sounds better, than a piezo pickup, at fairly low stage volumes and without effects. I just won’t go jumping off stages with it! Apparently the next serious competitor up is a DPA product that costs a cool £500 for the mike alone, clip extra. I’ll pass, thanks.

« Even better defended
The cashless economy »