Caravan Circus were out and about on Saturday, playing the opening set of a broadly jazz-themed night at Luna in Leytonstone. 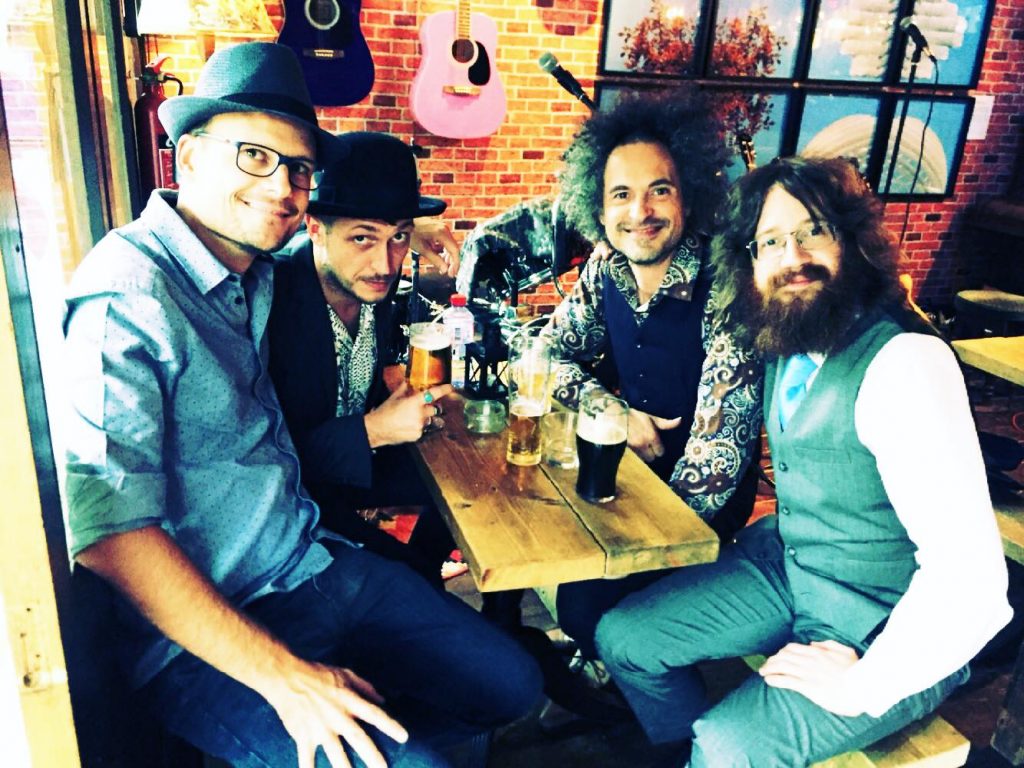 (No, not just drinking, despite apparent photographic evidence.)

On the plus side: we were given an hour to play in and allowed to overrun somewhat, the changeover times were hugely generous, and there were a reasonable number in the audience by the end of the set. On the minus side: We were told to start at 6:30, at which point there might have been more people in the band than the crowd (especially if you refuse to include the bar staff); and we were playing for two free drink tokens each plus a jug passed round to collect tips. Now there was something quite nice about playing a gig that didn’t have a door charge and opened onto the street – a certain sort of Continental café / boulevard culture rather than a rigid division between passing by and having paid to get in and hear properly (and then feeling effectively stuck in for the evening). And I don’t as such mind the playing for jug thing – it’s basically just busking with a PA, better weather protection if needed and a bar to keep punters around longer … However, thin audience numbers (and perhaps an ongoing squeeze on individual spending power?) meant we collected £35 between four of us, which is not exactly going to enable me to start paying into a pension scheme any time soon.

We were followed by another roughly jazz manouche band (I think the more loosely we can choose to define this term the better, in the interests of avoiding either stultifying stylistic slavishness, ethno-cultural exclusivity or cries of cultural appropriation … ), Hot Swing Bohème. I had barely started packing away when their vocalist-frontwoman Alisa, a petite blonde who I’m told is Dutch, though I didn’t pick up an accent at all, approached me with an opening gambit something along the lines of ‘You’re great! Can I steal you? put you in a car boot and take you away?’. This was to become a running gag as the evening progressed!

During changeover and their setup, I was hanging around, spending my second drink token, and buying a quality meal deal from the Tesco down the road (apparently we would have been fed as well as watered, but the manager who would have created the food was on the Continent – which also created an initial misunderstanding over timings that was down to the gap in time zone between her creating the calendar and her shift manager in the UK viewing it!), then deciding I would stay and watch / listen to the next set – it was still quite early, and I could probably do with keeping an ear out for jazz manouche tips and tricks in general!

Like us, Hot Swing Bohème had shed their drummer for the evening (it turned out they share him with the Tiger Lillies, to whom my old band the Filthy Spectacula are fairly regularly compared). That left them as a trio: Alisa on vocals, guitarist Ed (playing what looked like the very spit of a classic Maccaferri, but was apparently actually made for him), and wonderfully named Czech bassist Wratislav, using the most unusual bass guitar I’ve seen in use possibly ever: a fretless five-string semi-acoustic, with a bung clearly made with and for it to its unusually shaped soundhole, for avoiding feedback when playing plugged in.

Inevitably, their repertoire choices were swayed by being a vocal-led group (Caravan Circus, with vocals an optional doubling by two of the instrumentalists, probably do at least 50% instrumentals, mostly Django Reinhardt compositions led by guitar), both in the direction of the Great American Songbook and of significantly ‘hot’ interpretations of European chanson material, some of it of decidedly un-swing origin! It took me most of the way through their set to realise Ed was using what (see an earlier post) I’ll call the ‘Carl Orr’ technique regularly: playing a fairly neutral accompaniment during the vocal opening chorus, into a looper pedal so that it could provide harmonic (and indeed rhythmic) context for a guitar solo in another chorus. Of course, as he commented to me afterwards, it isn’t as responsive and flexible an accompaniment as a second guitarist reacting in real time to the lead lines; but then again after a certain number of gigs it takes less share of the band’s earnings than another musician…

Maybe it was just because the only seat I’d been able to find was pretty much front and centre of a small venue (and I do quite enough standing up busking, gigging, practising and on busy trains and Tubes thank you), or maybe it was my look of real attention, but the notion of carrying out some of the ‘stealing’ of me on the spot spread through the band. Wratislav had the most laid-back approach or the highest estimation of my impromptu abilities, simply miming violin playing and beckoning to me between numbers. Alisa, perhaps a little more intent on keeping control of the situation, instead rummaged forward through her folder during a guitar solo and held a sheet out towards me. Little did she realise that the number (‘Bist Du Mei Mir Schon’) was completely unknown to me, and my ‘sure, let’s do it’ nod was actually just directed at the fact she was working from a full lead sheet with chords and the melody notated, meaning I knew I could fudge it reasonably! Her forward planning gave me a few numbers to get the violin back out and ready (though I tactically decided to play forcefully rather than try to get myself plugged through the PA again) before squeezing my way onto stage for what I would call their last pre-encore number.

Note careful attention to the lead sheet, Ed’s headstock, Wratislav’s bass, and just how close the audience are! I had assumed that would be it, but also that it would be easier to defer unearthing the case from a huddle of people by the side of stage and putting the violin away until the band were packing away too, so I simply sat back down with it. Second and final encore was ‘Summertime’, and this time it was Ed and Alisa doing the beckoning up for a bit more playing, when the song was already well under way. I had thankfully by this time worked out they were doing it in the key I know (A minor if you’re curious), so no wedging myself in to peer at lead sheets this time!

I’m not sure of the chronology here, but in the course of the hour or so after the end of Hot Swing Bohème’s set (in which, remember, I had played on one and a half numbers out of an hour’s music), I was handed their two ‘extra’ drink tokens from having described themselves as a quartet and bought another two drinks on top of that by impressed and generous audience members. At London bar prices, it was probably more valuable remuneration than the full set I played, though as I didn’t buy anything all night in the monetary sense I don’t actually know what Luna’s prices are like!

Now I don’t want to end on too much of a downer, or to seem ungrateful. However, there are a couple of simple facts I would like to point out. Firstly, food is essential to life but alcohol is not. Secondly, musicians are notoriously unstable people, and plying a sector of society with such high incidences of depression, anxiety, mood swings, addictive tendencies, emotional or financial insecurity and frankly bizarre lifestyles with free booze may not be the best plan for their continued wellbeing or creative development. Thirdly, I would take £3 in cash over a free pint any day, because music doesn’t make much money and even more or less derisory amounts of money can be offset against rent, food and so on, which drinks on the house (or the audience) cannot.

So I do hope to sit in with HSB at another gig (they have a midweek residency apparently); but I also hope there will be payment in money, and ideally not in liquor. Watch this space!

One thought on “The cashless economy”