This post concerns two things I do that I wasn’t previously sure were actually doing me any good at all.

Firstly, when out busking since the start of this year, I’ve had a sign* in my case with a strapline, my email address and the web address of this site. From the way some people come up to look at it and then look disappointed and walk away again, I suspect they may expect it to read something along the lines of either ‘raising money for cancer research’ or ‘need £18 for 2 weeks in the night shelter’. Sorry folks, I rent a flat (shared with my partner) and all the money is effectively going to that …
(*I say a sign. Technically a piece of b+w printed A4 paper, reinforced by being Sellotaped to a piece of card of the same size that used to be the front cover of a pad of manuscript paper, inside a clear plastic wallet. Does the job while keeping that shabby (chic) busker vibe. Honest.)

Secondly, maintaining a comprehensive (OK, besides busking), even if it then seems decidedly heterogeneous, list of public performances on the home page of my website. All right, it evidently makes anyone arriving at the site feel I must be an active working professional or there wouldn’t be items on the list (and I always send the link with applications, so I hope at least some potential clients follow it!); but I wasn’t sure it actually led to anyone showing up that wouldn’t have done otherwise, let alone paying money and so indirectly furthering my career.

Those uncertainties rather changed towards the end of a freezing cold 2 hours busking in Victoria station yesterday.

A tall, middle-aged man I didn’t consciously recognise (though it appears I should have done if I had a photographic memory) approached me and said between numbers ‘We’re coming to see you at the Exchange.’ Besides the level of background noise on a station concourse, it was so out of context for me that it took another few lines of conversation for me to realise the exact significance. He had seen me busking previously, been impressed and made a note of the web address (perhaps photographed the sign –  this is very common as a substitute for taking a business card, though I have those out when busking too). I was clearly memorable enough that he actually looked up the site afterwards too; found the gig list; and went through it looking for one on a free date and at a plausible location for him (and whoever else constitutes ‘we’) to show up. That he’s prepared to pay £8 for the privilege only makes the story all the more flattering!

The gig in question is Kindred Spirit‘s on Friday 23rd March at the (still very new) Exchange cultural centre in  Twickenham (just over the  bridge from the Cabbage Patch!). It will be a full evening (well, as full as local noise curfews will permit) of our full-band original music, including several tracks from the forthcoming new album. The performance space holds 300 and tickets can be bought and seats reserved online here, so don’t be backward in coming forward (and please get seats near the front so we can actually see you!).

And more generally, clearly marketing across different audiences works. So if you’re a regular blog reader, why not look at the gig list and see if there’s anything you’d like to come to? Or, if it’s all just too far away, consider buying the Filthy Spectacula album, or pledging to buy the next Kindred Spirit one? Either way hope to see you somewhere slightly unexpected soon!

It’s been a while since I was involved in any recording as a collaborator ‘ full-time member – I did a mixed bag of recording at the tail end of last year as a session musician / bumper / hired hand, but that’s rather different. 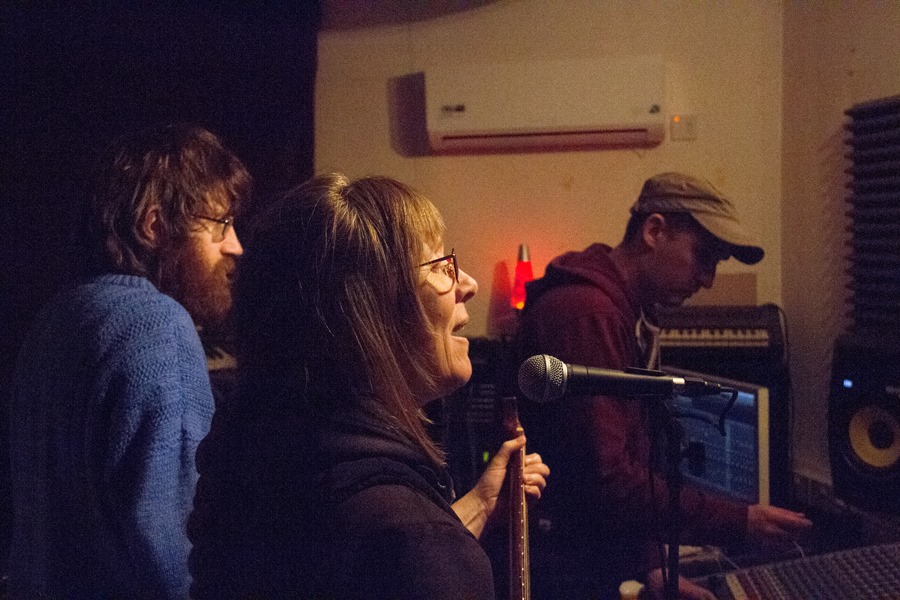 Sunday, however, saw vital foundations being laid for the next Kindred Spirit recording (or six tracks of it – it is increasingly likely that this will be about half of a full-length album with the rest being not only recorded later but currently mostly unwritten!) at Skyline Studios in Ashford, Surrey.

The main priority was getting Les Binks’ drum parts recorded (hence why in the above photo he is out of sight in the live room to the right, with Elaine, myself and engineer Jez Larder crammed into the control room).

But even with a click track, drum parts are pointlessly hard to record in isolation. So the band were there to play the songs and record guide tracks to help us navigate the tracks when we come to overdub our parts (and, in my case, some overdubs born of my relentless arranging itch) for real.

The observant will notice that even with drums out of shot, some of a five-piece band seem to be missing. Cat Cooper is still recovering from surgery on ill-mannered wisdom teeth; Mike Hislop had been laid low by one of the many strains of flu that have been rampaging this winter. This left Elaine (thankfully!) and myself to try and sketch out enough vocals, guitar and lead line framework to let Les and, later, the rest of us navigate six tracks – roughly, two straightforward pop-type songs, one issue-driven classic heartfelt anthem, and three deliberately prog journeys.

One of the particularly interesting bits for me (which hadn’t been done recording with The Filthy Spectacula in the past) was Les’s willingness to do one take as a trio, and then keep mine and Elaine’s guide parts from that, plus click, and amend or even entirely redo his drum parts with those in his ears – a slightly paradoxical-seeming situation of the drum parts, which will be followed by everyone else, following the guide track. On one track, which had had less rehearsal and possesses a particular diversity of time signatures, speeds and moods, Elaine and I recorded a ‘sketch’ track to the click and Les then experimented with drum parts from there.

My overdubs (electric violin, acoustic violin, viola and mandolin, sometimes multiple parts and double-tracked!) will hopefully be done on two Fridays next month. Also to do: flute, upper saxes and backing vocals (Cat); bass guitar and double bass (Mike); guest cello and perhaps baritone sax (Stevie); and a choir! Going to be epic.

Busking in several of London’s big train termini continues to provide a stream of bizarre, sometimes insightful, sometimes frustrating, little human snapshots, as well as a valuable though surprisingly unpredictable stream of income. Being photographed or filmed is not uncommon (though sadly no repeat of being recorded for a broadcast on BBC Radio  4 yet!); heckled occasional; applauded rare but not unknown; danced to, with varying degrees of ability and usually for about 20 seconds, common.

I’m still not sure how much of what I think are my observations about tendencies of people who stop and give money to buskers are real and how many reflect my prejudices. Are more of them elderly (perhaps the elderly like folk and classical, the mainstays of my busking repertoire, more?), perhaps simply because of being less likely to be cutting it fine for a train, or because the idea of buskers is familiar, or because they carry cash, or because they are less likely to have headphones on? Are they really more likely to be women (perhaps something about culturally ingrained gendering of compassion here, since it is always hard to distinguish whether buskers are paid out of appreciation or pity), or (dark suspicion) do I just remember more of those? Similarly, is it a high proportion of adults with young(ish) children who stop to actually listen, or are the ones who do stop just much more memorable than the ones that walk on? (Admittedly, I do still think the families with little kids are a disproportionately large share of the few people that actually stop to listen to buskers.) Are musicians actually less likely to give to buskers (because they’re probably cash-strapped, they are more likely to listen critically, they may be buskers themselves and recycling cash among buskers doesn’t really gain anything) or is it just that people with music cases are more likely to grab my attention than anyone else who doesn’t take notice of me, and therefore I notice more of the musicians passing by than other people? That said, the other day I did get a couple of handfuls of change from a violinist and a bassoonist who turned out to be going to a Royal Philharmonic Orchestra rehearsal; besides being gratifying to my musical ego, a salutary reminder that none of these trends are absolute even if any of them are real.

Requests are always a strange one. Many of them I actually use as prompts on what to memorise next (most recently, the title theme from John Williams’ score to Schindler’s List), though the recurrence rate of specific requests is so low that this is more a stab at playing things that people know and recognise (and so are more likely to pay for) than a guarantee of it. Though I haven’t done anything about the request (encountered a couple of times) for ‘anything Italian’. Suggestions of well-known Italian tunes / songs with a strong enough melody to be recognised instrumentally and unaccompanied welcome (and no, I don’t think the requesters meant Vivaldi’s Four Seasons, though you never know).

I had a particularly (to me) curious request the last time I was out. I was coming towards the end of a pair of Irish reels when a middle-aged-plus bloke approached and took up that hover people do when they want to speak to you but not to interrupt you playing. I gave him a (hopefully) friendly nod when I wrapped up, and he opened with:
‘Do you know any tunes?’
I should explain why this was so puzzling: in British folk circles, jigs, reels, hornpipes, etc., the instrumental dances of the traditional repertoire including the pair I had just finished playing, are called ‘tunes’ to distinguish them from songs. So it was odd to apparently be asked for what I had just been doing. Brain a bit fried (long week and over an hour’s solid unaccompanied playing already under my belt that session), I didn’t manage a more elegant expression of my confusion than:
‘What do you mean by tunes?’
‘You know, tunes. Greensleeves or something.’
I duly started up Greensleeves (what the customer, or rather prospective donor wants, the customer gets, if I can supply it) and his face immediately brightened; he dropped some money into my case, and then, after what felt like about 8 bars, wandered off.