Or the never-stopping tour bus … 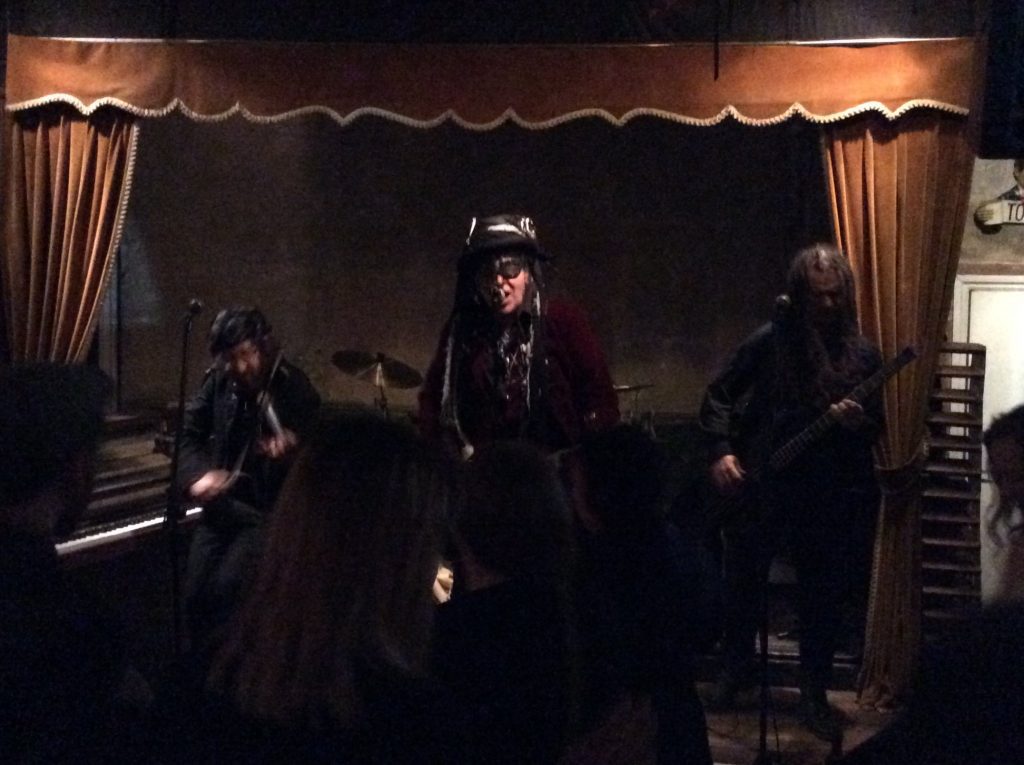 Familiar territory Friday night, The Filthy Spectacula headlining Jamboree with the Swamp Stomp String Band supporting – all of which has happened before. Which isn’t to say that we didn’t kick 2018’s gig schedule off with a bang. Jake and George’s high-energy ‘fake hillbilly’ act is one of the few on the London circuit that can compete with us for sheer energy, fooling around (not even we dare stand on each other’s instruments, though none of us plays anything quite as practical to stand on as double bass) and songs about alcoholic excess and death, and Jamboree can always be counted on for an enthusiastic response and a good number of dancers. We hope to see you all again!

Next gig for me (barring busking spots) doesn’t come up till the weekend after next, when the duo form of Kindred Spirit return to the Cross Lances in Hounslow (after two gigs there as the full quintet). To keep up to date on forthcoming performances, see the list (now kept comprehensively up-to-date) on the home page.

A fortnight between gigs doesn’t mean a slow start to the year though:

So watch this space …

Well, technically back on the station concourses, but that doesn’t have quite the same ambiguous ring to it.

Conventional wisdom, particularly gigging band wisdom as opposed to classical or musical theatre (does that last include panto?), says there are never any gigs in January. And my diary for this year more or less bears that out – apart from the last half-hour or so of Kindred Spirit Duo‘s New Year’s Eve gig (entertaining Basingstoke’s Irish community!), and an early re-start for the Filthy Spectacula, gigging on the last Friday in the month at Jamboree, no paying conventional gigs this month.

However, I’m not given to letting the grass grow under my feet. That’s partly meant intensive work on some of the standard upper-end classical viola repertoire, notably the first Stamitz concerto (aka ‘the orchestral audition piece par excellence‘!); and keeping my orchestral hand in with a scratch play/sing-day on the Verdi Requiem (subs waived for me as a known pro, so it only cost me my lunch, which is fair gain I think).

But, none of that pays the rent as such, and a house move in December has pushed my accommodation expenses up, besides driving lessons (eyeing independent travel to and from engagements in a couple of months) and a desire not to expand the amount of my time and energy spent on publishing work. So, I’ve returned to the London train terminus busking scheme. A tighter focus on British fiddle dances – jigs, reels, hornpipes, etc. – with some classical lollipops as variation (if only to give my arms some change / rest!) seems to be paying dividends in more dependable income, and occasions when I’ve got lucky with which slots I was scheduled have been truly lucrative. If I keep up a couple of stints a week as at present, there is a genuine possibility busking might become my single biggest source of musical income for a while!

Curiously, this was (just) anticipated by a repeat of a Radio 4 programme on intellectual property – which features me playing and granting permission to be broadcast on condition of credit by name near the beginning. From the number of family and friends that caught it this time, the repeat seems to have enjoyed a substantially larger audience than the original broadcast. Well, it’s all good publicity …