Not literally (unlike singing tenor in Tallis’ ‘If ye love me’ a couple of weeks back, with its top Gs. But that wasn’t professional).

Two weekends ago (Pentecost, in the most relevant way of counting time for this context) I sang another service at St Matthew’s Bayswater, depping for their bass scholar Michael Rakoto. It’s good to keep my choral singing reasonably in practice.

The real departure, though, was last night’s engagement at Richmond Letcombe Regis, hopefully an entry for me into the retirement home performance circuit. If you follow the link and think it looks like the poshest retirement home you’ve ever seen, well, I’m with you there. The brief, for myself and pianist (and second violinist on one number) Rachel Greene, was 45 minutes, after early dinner, try and engage a rather reserved crowd but one that also know their stuff musically. The booker repeatedly described them as ‘a tough crowd’ and the atmosphere (and the acoustic!) in the restaurant space as ‘dry’.

Well the acoustic certainly was lacking in resonance and an electronic piano put through the PA and hearing loop system seems to have been a better solution for the audience than for Rachel hearing herself well. But I take issue with the tough crowd statement. A deliberately heterogeneous mix of classical ‘lollipops’, swing and Latin numbers, Irish fiddle tunes, an English traditional ballad and a number lifted from Les Misérables seemed to find something up most people’s street (I was complimented by a couple of Stéphane Grappelli fans afterwards, which is mostly flatteringly gratifying to my jazz violin skills). But my plan of attack had never been purely musical; it also involved (contrary to all expectations that if you hire a violinist, let alone a violin-piano duo, you’re getting a straight-up straight-laced classical recital) leaving Rachel behind the piano to do the hard work musically and follow the lead, while I engaged the less controversial aspects of my non-classical performance experience to work the crowd. My, let’s call it, physical expressiveness, wandering around the space (paying only the necessary attention to sheet music) and between-piece chatter to the audience certainly got their attention, and seem to have been rather enjoyed than otherwise. Energy was key to this I think – if you expect to be in the background you will be; if you act like there’s a spotlight on you, it’s amazing how many people will fall into line …

All in all, we had fun and as far as I can tell so did the audience. So, retirement homes, if your performances need a little spark bringing to them, you know who to call …

So tomorrow when it’s ‘the weekend’ …

Kindred Spirit head to Richmond May Fair in the afternoon, with ex-Judas Priest drummer Les Binks on the stool this time while Chris Goode tours with his punk outfit The Drunken Ramblings (well, I say tours … presumably rambles … ). Catch us between  to find out whether the stage really is too high for me to jump off (it was a close-run thing at the Fleece with the Filthy Spectacula but I dared it with relatively few people down the front).

Then I’ll be crossing London to Jamboree, to meet up with the String Project and soundcheck for an evening set supporting horn-heavy psych-country-bubblegum showstealers Platypus. Doors are at 8 and if you know us, Platypus or Jamboree you’ll know you can expect some surreal, energetic but very fun times! Don’t make too many plans for Sunday …

Thursday’s Filthy Spectacula gig was unusual for us in a number of ways.

For one thing, we were playing just a half-hour set at the Fleece in Bristol, crammed into a midweek gig night bill with four other acts. These days we mostly seem to do either festival sets or all-evening bookings with no one else playing.

For another, since we were supporting this leg of a UK tour by US gothdom’s most media-friendly spokesperson Aurelio Voltaire, the most prevalent tenor of the night was the goth one. This tends to crop up in our freestyled lists of genres we might touch on (alongside steampunk, dark cabaret, ska, punk, ska-punk, gypsy, pirate, dark cabaret, dark folk, dark, debauched, drunk, anything else beginning with d and ‘unique as F*ck’), but as a subculture hasn’t had much direct contact with us.

I don’t have strong feelings either way on white foundation, guyliner, bats or pathological avoidance of sunlight; as usual, I’m more interested in the musical implications of finding ourselves in that sphere.

There was serious discussion among the band in advance as to whether it would go down well to even try and get people dancing in our usual raucous-n-rolling style (the phrase ‘the dead don’t dance’ was used!), and certainly the other two local supports were mostly about mood, not to say brood, rather than beat.

In the end though we went for standing out because we were never going to blend in, and probably delivered one of our most intense sets ever knowing we didn’t have to keep it up for long! It may have jarred against our immediate neighbours, but credit to us as the outsiders and to the crowd for not being too tribal we did win over a fair number, produce a satisfying amount of crazy dancing and make some new fans – not least among the other bands.

Tour support Cauda Pavonis kept up the darkness and the use of backing tracks (we were the only act to do everything live except for Voltaire himself, who, clearly used to maximising touring profit margins, took to the stage bolstered only by his own acoustic guitar and a half-litre of Cuban rum), but added sledgehammer energy to the mix, driven by gut-deep female vocals, guitar power chords, six-string bass and possibly the largest drum kit I have ever seen in person. Much more up our alley and the sentiment was mutual.

I had to miss half of Voltaire’s set due to catching the last  rail replacement bus home for work in the morning, but even stripped back to acoustic guitar and voice, his mix of playfully gothic lyrics and near-rockabilly musical styling clinched the night for energetic danceable performance (and larger-than-life stage personality!).

Icing on the cake for us though was certainly getting another (and hopefully somewhat more lucrative) gig out of it through new dead musical BFFs Cauda Pavonis – so black wearers of Bristol, if you missed us this time, you can get a closer look in June:

This Sunday’s service at Cowley Road Methodist Church will be a celebration time filled with much music indeed. We are thrilled to have friends joining us to sing choir music by Rutter, Hayes… 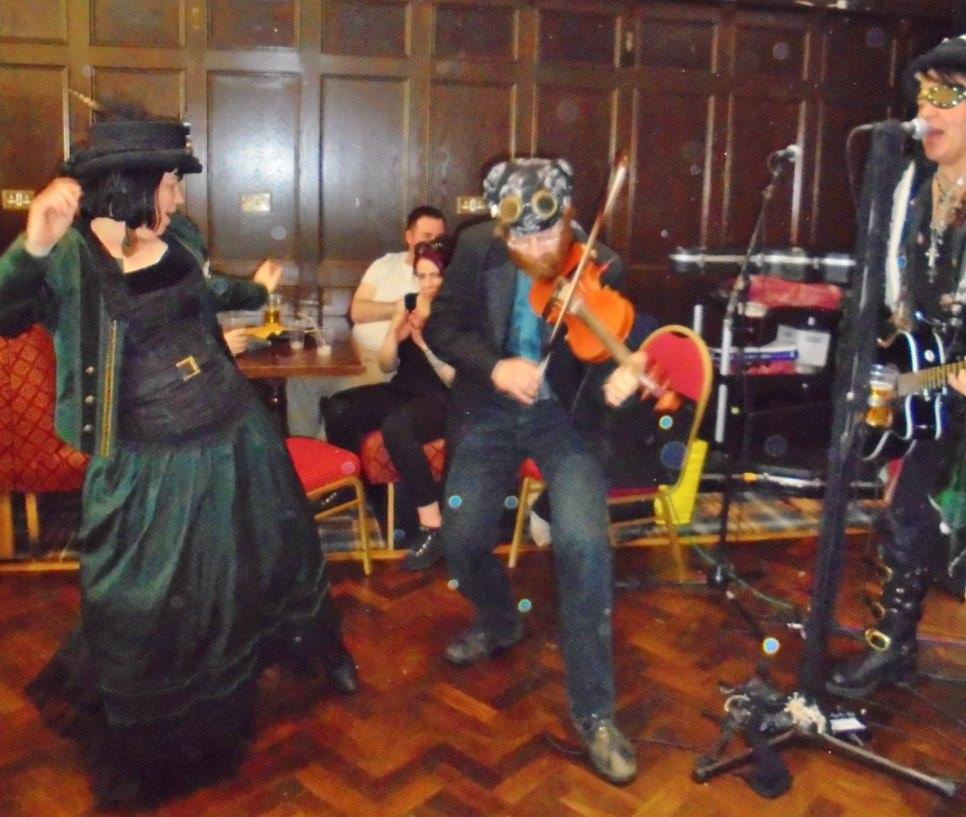 First up was a trip out into Wales (well, for those of us that don’t live there or nearly there) for Landed, a generous-pocket sized affair that had us on mid-evening Saturday, between 7 teenagers from Merthyr Tydfil I’d roughly categorise as soul-inflected indie and a proper political ska band. After coming from Twickenham to nearly Llandrindod Wells in the back of a car, I was having difficulty tearing myself away from a beer tent full of mismatched sofas and very strong vanilla stout … but once they got over the initial fear (a common starting reaction) the crowd loved it and so did we.

Onwards the next day to Rochester, for their ‘Sweeps’ May Day festival. My advance fear had been not getting an audience at our afternoon slot in a pub – it turned out lack of people was the last of our worries. Getting through the crowds with a PA and a drum kit, now that was an issue. Breathing. Getting into a loo. If you’ve never been to Sweeps: don’t turn up before about 7pm if you’re at all claustrophobic or sociophobic.

Even by 5 we found some respectable upstanding local wives in a merry enough state to apply some very interesting dance moves (and a selfie stick) to our set, and as you can see above I just managed to squeeze out between Mr E’s … er … strumming elbow *that was close* and my mike stand to join them and the band widows, fast becoming my signature gimmick with all bands. I’ve realised if you’re doing a blazing fiddle solo at the same time, no one seems to really notice how terrible your dancing is (and I think they let you off with a lot more sloppy fingerwork on the violin too). Quids in all round really …

Things had quietened rather by our second full-length set, in a different venue over the road at 9. However, we did get to serenade the main booker for the event, so here’s to bigger (and less crowded! and with artist parking and house PA!) things next year!

And in the meantime, to going over to Bristol tomorrow night (yes, Thursday!) to support goth royalty Aurelio Voltaire and dark cabaret crazies Cauda Pavoris at the Fleece. If you’re coming, email info@thefilthyspectacula.com to get on the £5 off on the door list and show up by 7:30 to see our set! There for a Filthy time not a long time …

So, the new version of the String Project (no Spinal Tap / Jazz Odyssey references please … ) went public for the first time on Friday night, and it was beyond my expectations at least (maybe…