Saturday saw me doing my most westerly gig for a while, getting the National Express out to Cardiff and then on a hire coach to Carmarthen. I was taking up a viola chair with the wonderful Welsh Musical Theatre Orchestra for the first (but certainly not the last) time.

And so a small orchestra with some of the characteristics of a pit band (piano, kit, saxes, multiple wind doubles, pairs of trumpets and trombones while the rest was chamber orchestra sized), plus a hand-picked squad of vocal soloists and conductor Andrew Hopkins, had a couple of hours of slightly camp fun in the Lyric Theatre with the sounds of the West End, Broadway and Disney. And that was just the rehearsal.

Joking apart, this was a fun gig, and it’s always nice to be asked to think about the visual and performative aspects of orchestral playing rather than only the purely musical ones. Having got a better grasp of Cardiff’s geography (for future transport interchanges) and more importantly the Shows and Soundtracks programme folder, I’m looking forward to repeating the experience – specifically in Port Talbot on the 16th of December. See you there if you’re currently of Cymraeg residence!

Mostly not literally, though as with most pub/band gigs the lighting makes for interesting colour tone … These are from depping on bass with 2Blue in Eastleigh a little while back, a gig I’m pleased to say I’ve been asked to repeat! 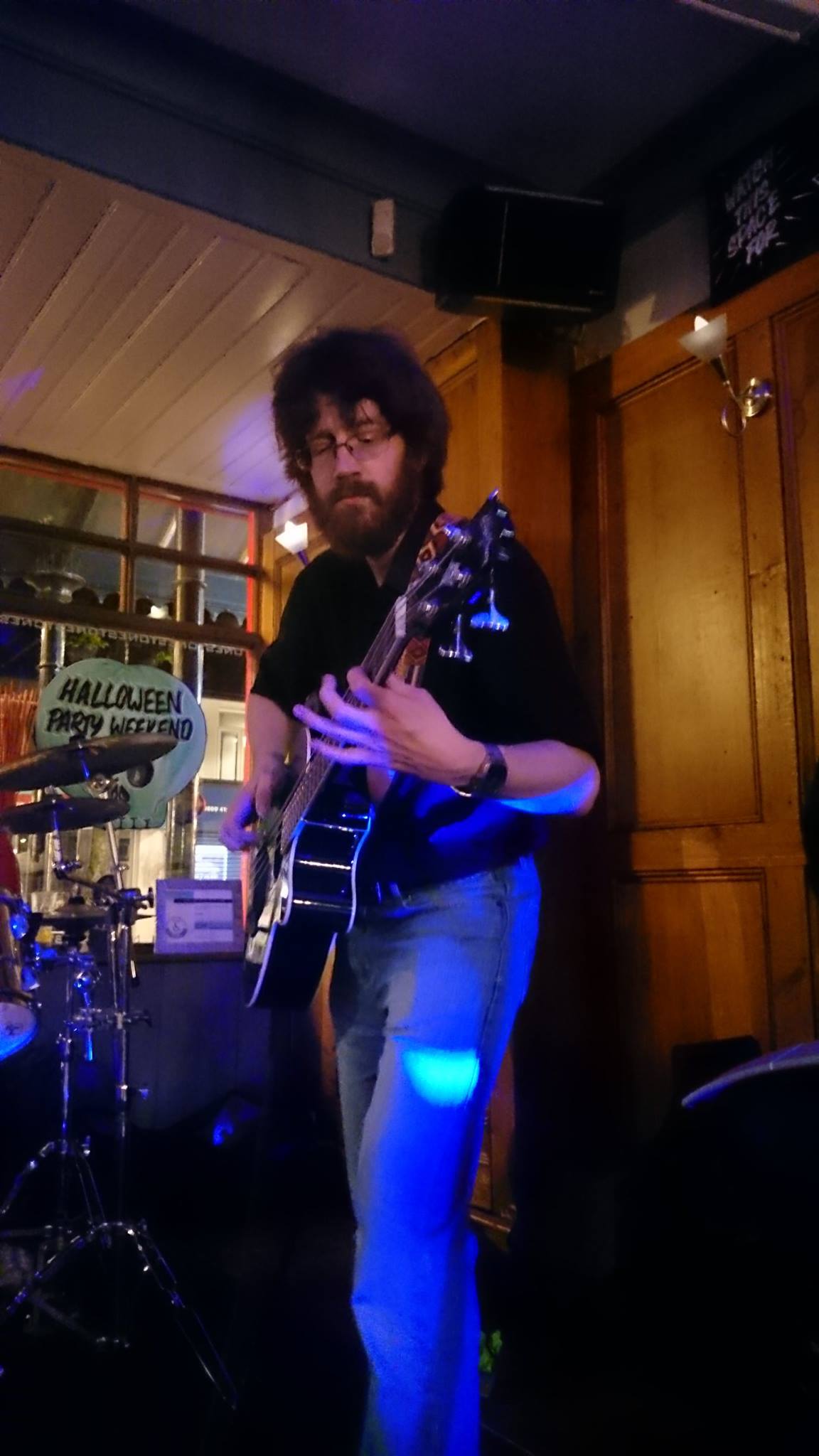 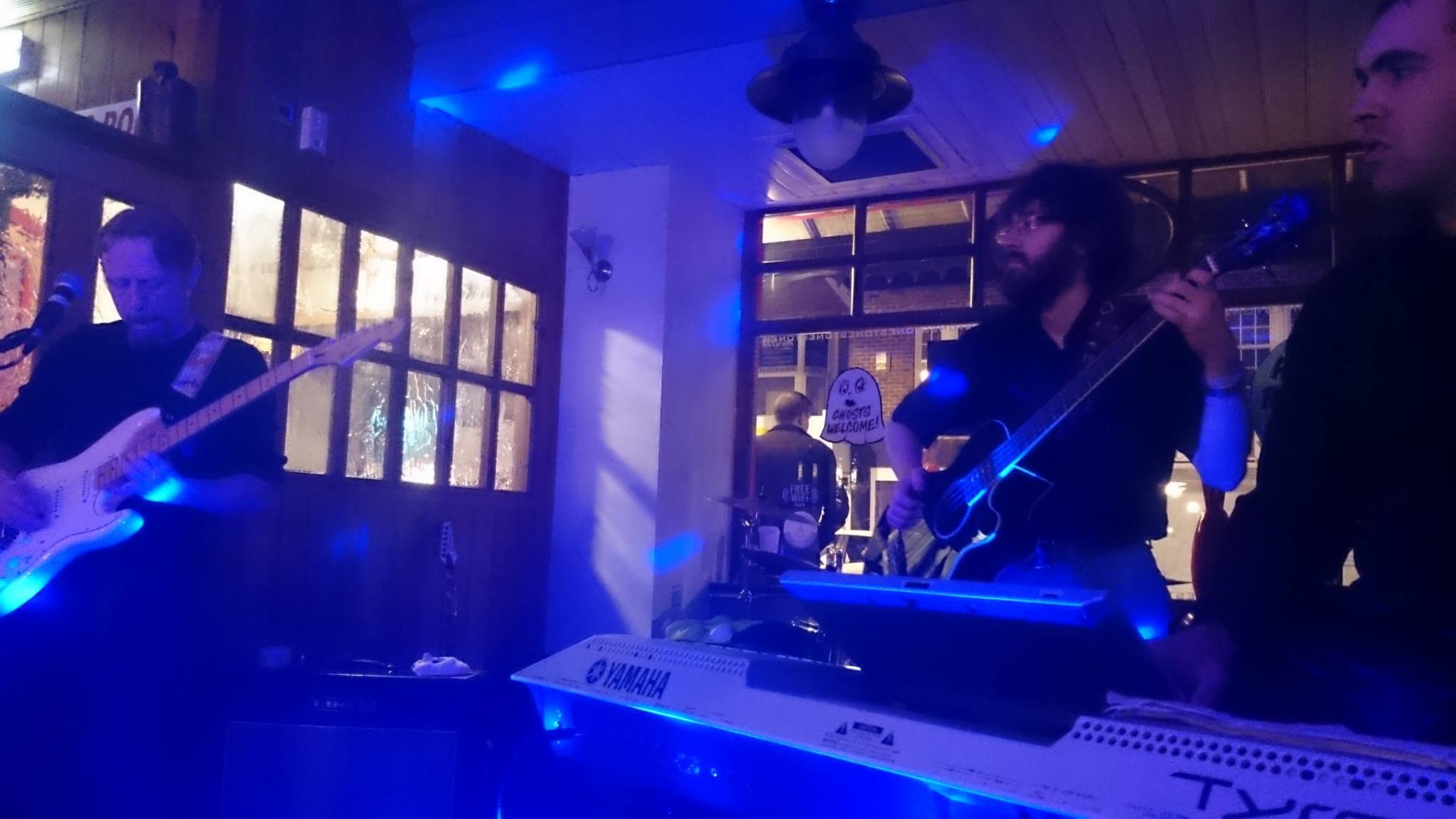 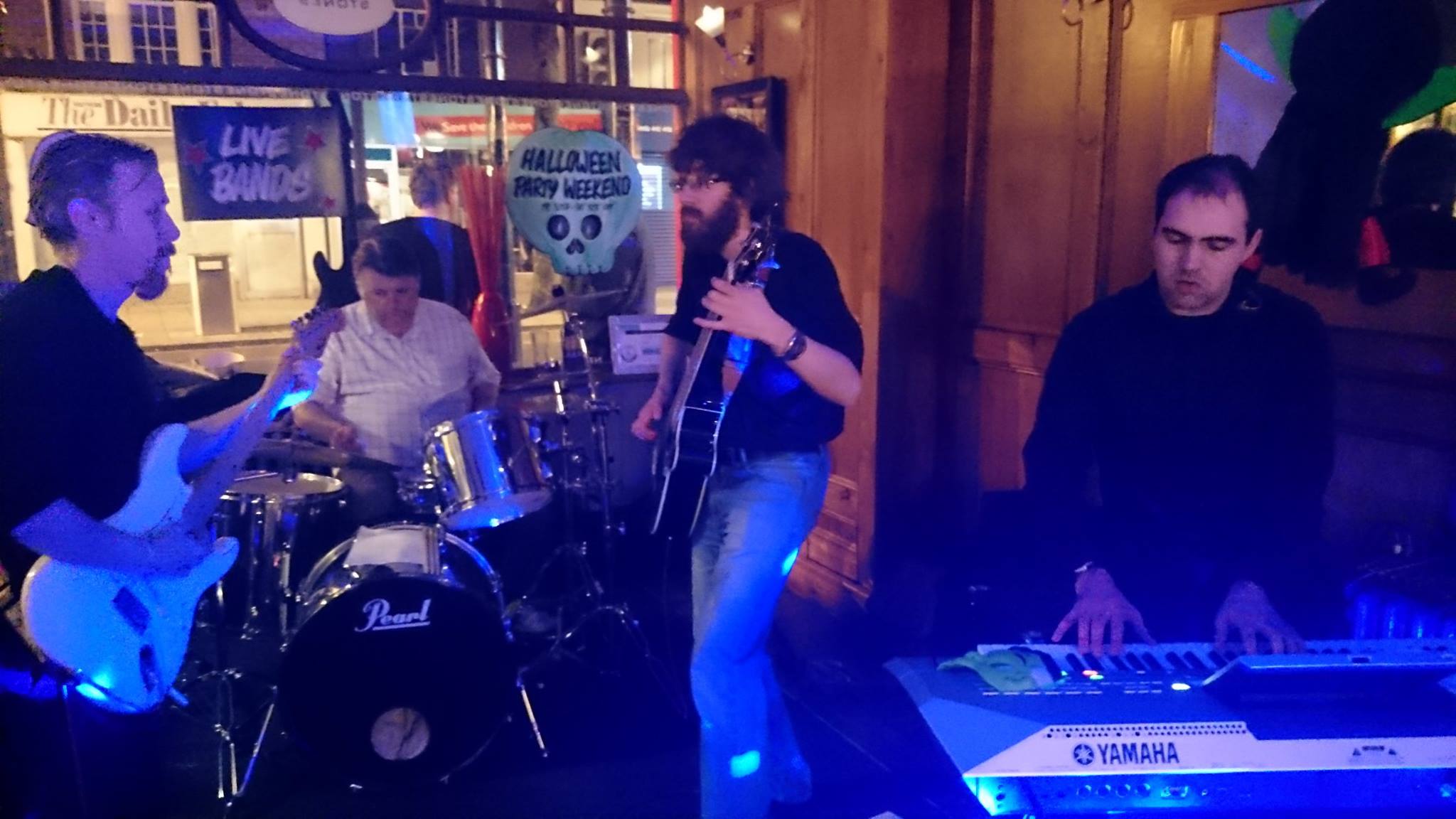 The last two afternoons have seen me and some helpful and highly dedicated friends gathered in two different churches for a couple of hours each, doing a handful of things over and over again.

This is known as ‘recording’. Or in this instance, ‘filming’. Across a total of nearly four hours, we managed to record and shoot various takes, of which I think at least one each is good, of two solo pieces (one viola, one folk fiddle), one violin-piano duet and one jazz trio number. If that doesn’t sound a lot for the time, you obviously haven’t been at too many recording sessions. If you’ve done a fair bit of recording and it sounds a lot to get done in four hours, you’re right, but I had practised murderously beforehand and it was all being done classical recording style – live to a stereo pair of mikes, full-length takes, no overdubs, no splices. It speeds things up a bit. I was still very drained by the end of afternoon 2! Massive thanks to Ben Mowat and Justin Gibson for doing the recording and shooting, and to Stephen, Emyr and Wulf for accompanying various bits. I owe you all serious favours!

Very unusually in my musical life, this was actually my own project on my own initiative, not as a hired hand for someone else or even part of a collaborative group. It’s high time I had an up-to-date video showreel again, and so I’ve bitten the bullet and gone ahead with producing one (and trusting it will pay for itself!). If there are particularly good takes and sound quality in there I may well put up some complete audio tracks, as well as editing together a video highlights reel for Youtube. Of course, the next step is that I will have to go through the footage and audio (cringing horribly at myself doubtless, particularly the chatter at start and end of takes), pick out the best takes and work on selecting sections, ordering and editing together – all the backroom stuff that a freelancer is often spared. (I say spared because what musician wouldn’t rather just play the music and go home in all honesty? Well, actually quite a lot of people I guess, otherwise there would be no producers in the world … )

Anyway all this is still to come, but hopefully not too long before I can present some finished products and set about reeling in clients with renewed energy …

Last night, the String Project headlined a showcase / launch night for our label, All Will Be Well.

(There are three altogether, split by geography and genre; the Reading one has already passed, but you can still catch the Oxford rawk night in early December.)

The risks of a ticketed event with six acts, each doing short sets, without a direct connection to each other, are evident (especially on a Friday night, when Oxford reliably has an oversupply of good entertainment options). But they are more or less the same as the potentials for something really interesting. And in the end it was the latter that paid off, almost exclusively.

The evening started with a rather select audience – but it filled up dramatically within the first half, to a pleasantly full-feeling room. The atmosphere was friendly, by and large attentive, and open-minded. I certainly heard some original (All is Worth), entertaining and durable (Ben Gosling, Louise Petit) and beautiful (Stu and Sarah) music by performers I would have been unlikely, realistically, to go and hear otherwise, and not all that likely to share a bill with either.

And I hope (and have good evidence from audience comments afterwards!) the same could be said of those who were new to the String Project’s music too. We had set ourselves a challenge for this gig: within a half-hour slot, fitting in one new vocalist (congratulations Countess! you rocked the place!) and one guest vocalist (Lauren Bradford, reprising previous guest appearances with and without the Eko Collective), some quite new and some revived material, and finishing the evening off with a bang. And I think we pulled it off; probably as tight and slick as we have ever been despite how tricky it is to set that band up and though even without a drumkit the Jericho Tavern‘s stage feels a little tight when there are 8 people on it (not for the whole set thankfully!).

All in all, a very good night and part of a general feel of building momentum and increasing expectancy about the label project. All power to your elbow, All Will Be Well! 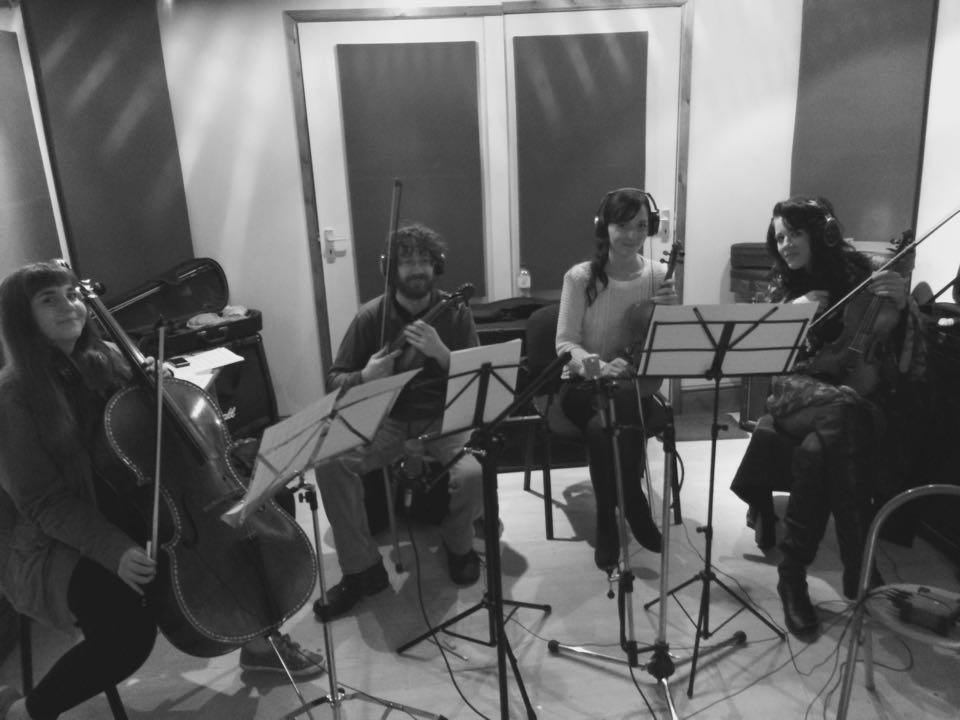 To most people, my job title (outside my day job … ) is ‘session musician’. The term is often used even in the music community for freelance / jobbing players. Which is a bit misleading considering there is hardly any money (certainly hardly any profit) in recording for anyone now, and so there is much more likely to be budget for additional musicians at live events. Live is probably 19 out of 20 jobs for me.

However, yesterday I was actually recording as a professional job (see photo!). Electronic music producer / writer / impresario Tai Azeez has a real love of the sound of live string instruments, and so the four of us (me on viola) were gathered to lay down various sections, lines and loops – individually and as a string quartet – for use on four or five of his tracks.

A long recording session (5 hours this time) is always hard work, but we kept it amicable and friendly. The nature of this sort of music is you can’t really hear any rough mixes till Tai’s cut up the takes into the sections and reapplied / layered them onto his tracks, but he says they sound really good. I’m looking forward to hearing some results – and working again with these lovely people!

Last night, I travelled down to Eastleigh and played bass for blues-rock covers band 2Blue, allowing them to maintain a semi-residency gig with a local live music venue-cum-pub.

A quick look around this website will reveal that bass guitar isn’t one of my primary professional offers, and so I had put quite a bit of effort and perhaps an unnecessary amount of worry into preparing for this gig. The prep certainly paid off though, as the band were complementary about not just my playing but also my ensemble / variation work

Both the blessing and the curse of material of the nature of most blues songs is that there is no fixed arrangement or parts (ignoring real blues-rock standards and a handful of other songs where the riffs are expected to be reproduced note-for-note). This means even as a dep rhythm section player, having got beyond whether you keep up with the chord changes, you will stand or fall substantially on ability to produce / select riffs and figures, and to then produce variation in line with the rising and falling dynamics around you (which will almost certainly not correspond to those of whatever recording you learned the song off, since the placing of solos, verse repeats etc. won’t either). Equally though, while this might seem to make the musical, rather than technical, demands of playing any instrument rather similar, it doesn’t mean I can use the same bags of tricks as a bassist that I would as top-line melody instrument on violin (not on blues rock anyway; maybe on modern jazz). So I’m certainly going to be somewhat pleased with a regular band saying it’s enjoyable to play with a bassist who comes forward and drops back and varies the intensity of what I do.

This may be subject to the criticism of over-analysing. The short version goes: another evening that proved there is no oxymoron about the phrase ‘party blues’, and I think everyone had a good one.