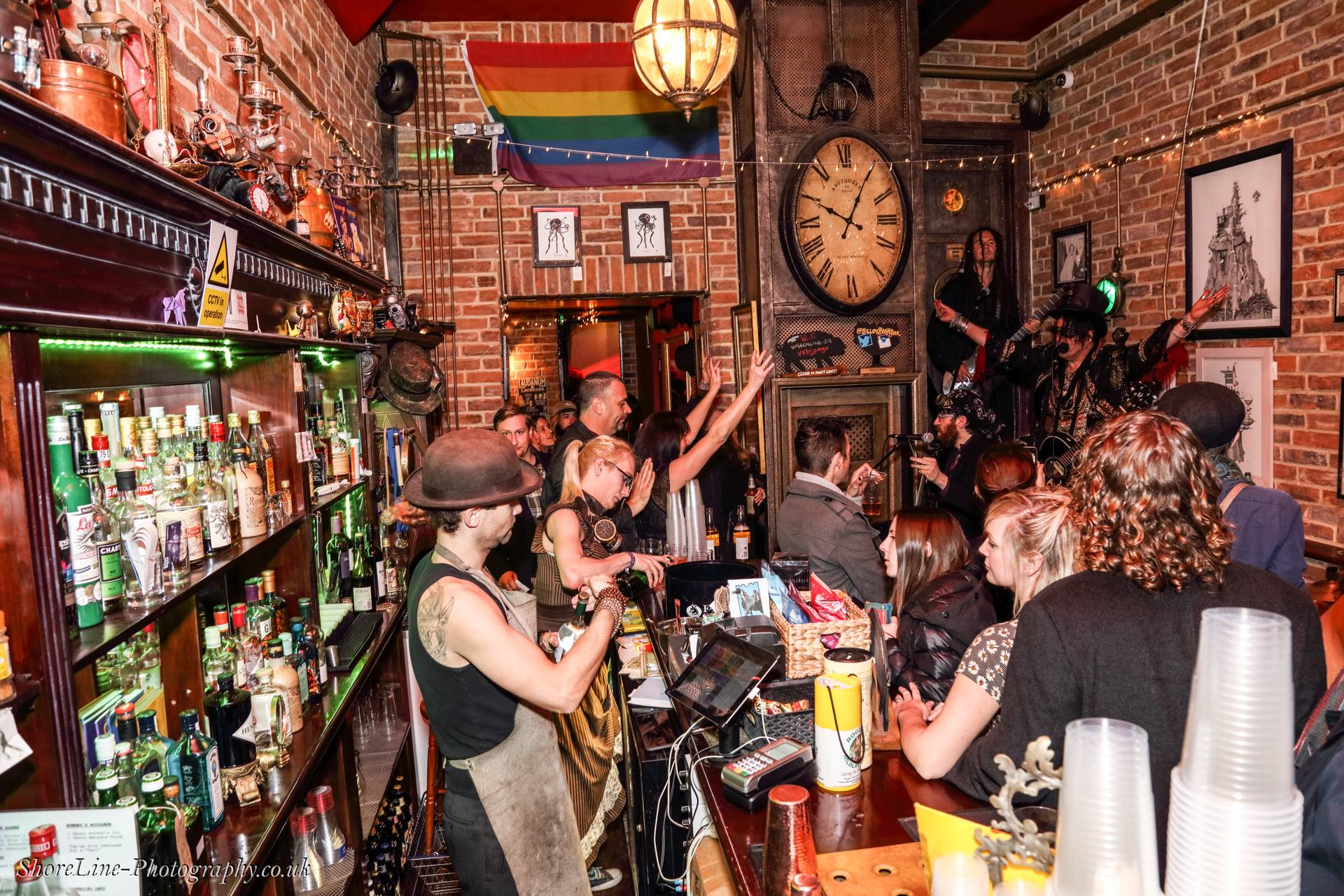 One commentator on the above photo says the venue looks smaller than his flat, and I can believe him (the bar does actually go back through the archway under the Pride flag, but you can’t see the band from there so it was pretty empty until you reached the smoking shelter).

Nonetheless, once we’d got through setting up and soundchecking in that little corner / staircase, this was actually a great Filthy Spectacula gig, as packed as it looks and if anything even more enthusiastic, a noisy, appreciative, lairy in the best possible sense crowd that, just like our previous gig at the Yellow Book, disproved every disobliging thing I’ve ever said about steampunk crowds just wanting to sit down and drink tea.

Not that it was all steampunks – special mentions have to go to Gabriel, who I met on a train weeks ago coming home from a practice with his reggae band, plugged the gig to with no real expectation of him coming and he was there with three mates! and Mel and her bloke who came over from Dorset to Brighton just to see us. All of them had a great time, so it just goes to show it’s worth following up every chance!

And on the viable principle of going to play where you have fans, we need to sort out gigs in Dorset and Tonbridge Wells (that’s another story involving Weekend at the Asylum and The Men who Will Not be Blamed for Nothing … ). We’ll work on it – especially if you pester your venues to book us, then give us their email address so we can ‘conveniently’ get in touch to ask for a booking at the same time!

Meanwhile in the social media sphere, discussing airplay courtesy of GASP on Midlands Metalheads: ‘Anyone else got the urge to dress like a pirate yet still dance like Madness?’ ‘That’s the Filthy Spectacula effect!’ I promise we did not rig either of those comments, seriously. Some things are too perfect to make up.

Saturday coming sees the last Filthy gig of the year, playing at the Northampton branch of O’Neill’s, who must be taking at least as much of a gamble on us as we are on them. All I can say is, if you’re offended by swearing or songs about violence / prostitution / alcoholism, what are you doing in an O’Neill’s on a Saturday night?

Not my last gig of the year though, as the remaining weeks of December pack in a wedding job, a Kindred Spirit full band gig, and a Christmas musical and carol service for an evangelical charismatic church in Euston before Elaine and I play the old year out and the new one in as the Kindred Spirit duo. Watch this space for further details!

« All ways autumnal
Not as Irish as you might think »

One thought on “Good things come in small yellow packages”