Sorry it’s been a while. Classic British winter colds may not stop you typing in the way they stop you talking, but they certainly interfere with the creative process. And in fact with getting anything done that doesn’t seem pressingly urgent at the time. I think I’ve more or less caught up with trivial things like paying in gig fees, invoicing and immediate desk work deadlines, so writing can be allowed to rise to the surface.

The first big news since I last wrote is of course Kindred Spirit‘s trip to HRH Prog 7.

When I eventually internalised, a few weeks beforehand, that this was a festival gig in Wales in November, I was rather worried. Would ‘accommodation provided’ mean freezing to death in some glamping tepee? Would the audience potentially all disappear to a bar tent in search of mulled wine or at least a good beer jacket if (as is generally likely in North Wales year-round) it rained through our set? Would we be on an open stage and would that mean the flute changed pitch in one direction, the violin and guitars in the other and my fingers simply locked solid by halfway through the set?

Luckily, while this was definitely a festival setup, it wasn’t canvas on grass – and I think the organisers had actually been very clever about this one. They had block-booked a holiday park for the weekend, including accommodation they could sublet to punters and two big spaces to use for performances. Sadly the water park seemed to be closed!

Why do I think this was such a good idea? Well, it means a festival can practically be held well out of normal season (May to September, roughly), when people’s wallets may have recovered from the summer but not yet plunged into pre-Christmas budget-stretching – and there’s much less competition. At the same time, if the stages, and audiences, are indoors, and default sleeping arrangement is those mobile home-chalet things that have actual beds, walls, heating, hot water if you can figure out how to work it, showers and the means to make yourself real coffee in the morning, that has a distinct appeal to those who may have, shall we say, outlived the thrill of roughing it (or the notion of planning in advance to be so drunk and/or drugged up you just pass out from 4am to noon regardless of the conditions). Rock audiences in general are largely middle-aged and upwards, except for the subcultures, and most people that choose to see something with ‘prog’ in the event title are probably at least just about old enough to remember Pink Floyd before the split from Roger Waters. You’re likely to get more of them turning up if they can live in middle-class holiday conditions rather than penniless teenager ones.

Anyway, after about 5 hours in a car (well, two cars between band members, video and sound crew and guests), a couple of satnav fails and many many hairpin bends, we got ourselves to Pwllheli and – what was more of a navigational challenge – the right two chalets (I think they were numbers 137 and 138. But there may have been more hundreds than that) by mid-afternoon Saturday. We had been put flatteringly high on the bill – second to last on Saturday night, albeit on the slightly lesser of the two stages – but had a radio interview to fit in before setting up.

In fact, we ended up with another radio interview to fit in before the radio interview. We showed up dutifully punctual (unlike everything else at a rock festival and contrary to organisational assumptions) to the ‘artist area’ to be shown to the Midlands Metalheads trailer – to find that of the two conflicting times we had been given, the half an hour later one was when we were expected (of course!). There were then some confused mumblings about maybe fitting in an interview with someone else instead of us just waiting around. I think that ad-hoc interview eventually started about 5 minutes before we were supposed to head to our other one! No matter though, as even after substantial hilarity (how do you interview 5 people simultaneously?), picking questions at random out of a deck of cards, and being awarded and consuming lollipops, biscuits and jelly babies according to the quality of our answers (Pavlov lives!), the second interviewers, who had booked us first, were still glad of the wait as they had to format new SD cards for recording more vast amounts of audio and video. 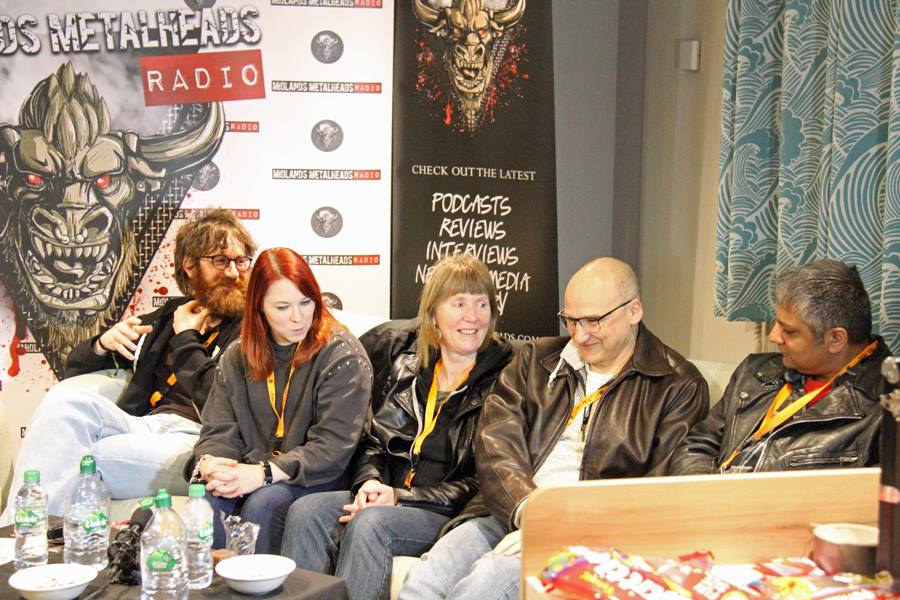 This is clearly one of those moments where we question the wisdom of letting the bassist (Mike, second from right) talk publicly. Though I seem to have appreciated whatever he said more than Cat (flute/sax/vox, second from left).

Personally, I appreciated the tea on offer (I’m very rock-n-roll before performing) but was disappointed the interviewer’s very large black guide dog was being kept on the far side of the room. It’s not like there would have been space for him to jump on the sofa even if he’d tried …

One downside of being organised and punctual is most rock organisers expect everyone, even the genuine professionals (perhaps especially them), to turn up somewhere between 30 minutes and an hour after they’re told to. So we had taken all of our equipment to backstage, unpacked things, established that there was no point tuning till the instruments had come down to the freezing temperature there (onstage under lights was much warmer of course, though better than a lot of band gigs I’ve played) and got a little bored … by early in the set before ours.

Being further up the bill at a festival than you expected is great – but if it’s a multi-stage affair, it may mean you clash with acts in a completely different league to you. I could have tried to catch some of Strawbs’ set on stage 1 while waiting to actually change over for ours, but was leery of not noticing when it got to changeover time (especially if things didn’t run to schedule) given their set time ran over the start of ours by a few minutes. Instead, I stayed at stage 2 and watched the previous act, Exploring Birdsong. Like (I gather) a lot of the acts before us, these were on the heavy side of prog, leaning to math-rock or symphonic metal. A lot of their songs started with delicate vocal harmonies followed by exploding into extended heavy instrumentals, usually in complex additive time signatures, but unusual instrumentation at least meant they didn’t feel like a template band – three female vocals, the leader also playing piano, backed up by drums and second keys doubling bass. Yes, you read that right, no guitar at all (though of course the bassist, using a long-necked five-string, played some riffs well up into guitar register and even a few full chords on the instrument. Prog innit). I was particularly struck by one short number which was simply a cappella harmony for the three voices, wordless. 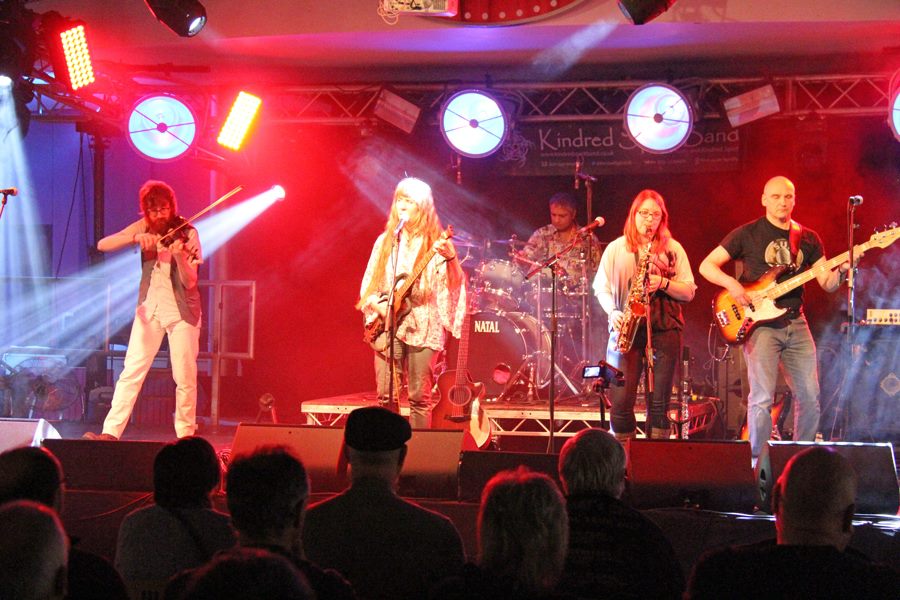 This gig was certainly a pleasure to play. Monitoring was perfectly adequate without being (through my MU-funded fancy earplugs) deafening, there seemed to be no problems with front of house sound either. Most of the space was set out with chairs (told you rock audiences aren’t where you find the young music fans – though also who wants to stand / attempt to dance through a 7-minute guitar solo in 13/8? It’s hard being a prog fan), but there were a gratifying number of people standing round the edge even when we started overlapping Strawbs. A few more filtered through presumably when that set ended, but the thing I really relished (besides lots of space to move around and the wireless kit behaving itself so I could do so freely) was that not that many left when Hawkwind (yes, really) started on the other stage. Plus apparently some of my bandmates chatted to punters who had moved over to Hawkwind’s set, got a taste of it, decided they had been having more fun with us and voted with their feet. Although in terms of my playing pleasure, I should perhaps have reflected that I’ve gained a little weight since I last gigged in those very tight white jeans a couple of years back. Changing was challenging, and even high-profile future audiences may have to put up with something a little less … fitted.

I think possessing melody, audible lyrics and dynamic range (so at least not everything is very loud!) can be a real advantage in a line-up where most of the acts are hard / heavy. Even tattooed Hobgoblin-drinking rockers like a change every now and then, and the fact we were different and memorable was positively commented on by lots of people afterwards, including a couple of radio presenters who are giving us airplay (actual FM play as well, not just internet-only). The gamble of putting our ‘prog-folk’ in the middle of a lot of black-clad hard math-rock paid off, both for us and for the organisers.

Of course, we don’t get to do things this glamorous all the time. As I write the next full band gig is at the Ottershaw Club (a sports and social-type club somewhere near Bracknell), and we have two pub gigs as a five-piece before Christmas. But that does mean you get to see the band that could steal audience away from Hawkwind for local gig prices (or even nothing at Wycombe’s Belle Vue and Hounslow’s Cross Lances). Don’t say we don’t spoil you.

Oh, and that cold? Well, one of the realities of a musician’s life, festival booking and token drink rider or not, can be having to spend 11 hours over two days in the same car as someone who’s already got one. Good job singing isn’t something I was being paid to do in the last fortnight!