Thursday 15 March saw the Kindred Spirit Duo – that is, myself and songwriter/singer/guitarist Elaine Samuels – out in the Surrey village of Claygate, playing a set entirely of Elaine’s original songs. Now that is somewhat unusual, since our duo gigs are usually bar or function jobs geared heavily towards covers, folk songs and the odd fiddle dance tune; the original material is usually interpreted by the full five-piece Kindred Spirit Band; as in tonight’s (Friday 23 March) full-length concert at Twickenham’s Exchange arts centre, for which I believe tickets are still available at time of writing.

However, I’m not going to write much about our performance, except to say that one song of it is captured on video here, and offers a pretty good snapshot of where my non-jazz improvisation (what would you call this? folk? acoustic rock? singer-songwriter?) has reached by early 2018 in an expansive but relatively understated musical context.

The really something different was the headliners, to whom we were only playing a relatively short support set. Gryphon had their first incarnation on the interaction of 1970s psychedelia, folk-rock and prog. I gather from guitarist and founder member Graeme that they reformed around four years ago, and have been (gradually, it would have to be said) re-establishing themselves, both as a live act and with a forthcoming album of all new material.

The line-up is the most obviously unique thing about this group. The reason, I believe, we supported them as a duo was lack of physical space, PA channels or soundcheck time for another full band once their armoury had been dealt with – even with them having a staff sound engineer. The foundation of drums, bass guitar and (mostly fingerpicked) acoustic guitar is not that exceptional; although even by prog-rock standards, the drum kit expansions were numerous, including (that I was able to note) bongos, tambour, triangle, bell tree, woodblocks and foot-operated sleighbells! As was the presence of the drummer as lead vocalist on several numbers.

The ‘front line’ (in roughly performance terms, regardless of usual roles) is where things really get involved. Sat at the centre of the band was the band’s other Graham (yes I know they’re spelled differently), mostly on keyboards (producing samples from harpsichord to pipe organ and beyond) and violin, but with occasional excursions to mandolin and harmonica.

It is the two wind players that really define the Gryphon sound though. Their newest acquisition commanded a range of instruments that might make even a pit band reed player blink, through various fife-type small transverse flutes, clarinet, soprano sax, treble crumhorn (Google it if you aren’t familiar with crumhorns … ), concert flute and a hybrid instrument produced by exchanging the flute head-joint for a tin whistle type mouthpiece. Meanwhile, main frontman and evident single most driving personality of the band Roger really brought the early music timbres, as well as an enormous proliferation of white hair from all cranial angles and a dress sense no tamer for the passing of four decades since pre-punk rock-n-roll … 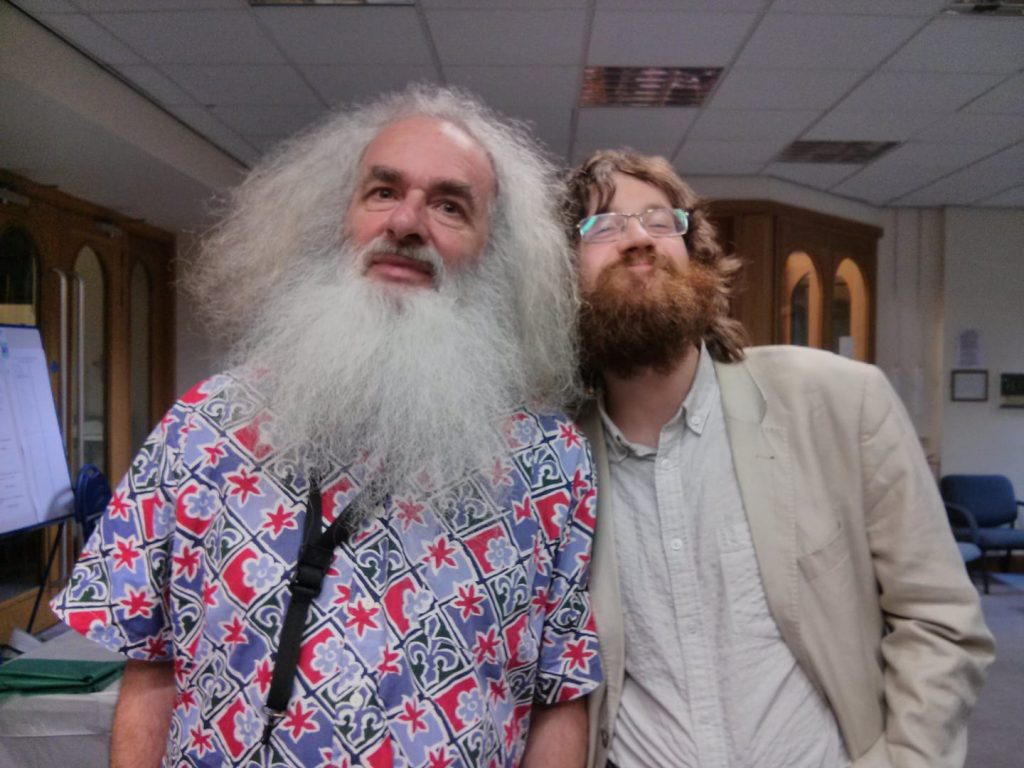 Besides some ventures onto lead vocals and additional keys, he visited during the evening [deep breath]: four sizes of recorder (I believe he avoided the much-misused and maligned descant, instead using sopranino, treble, tenor and bass), soprano saxophone, trombone and his evident signature instruments, bass crumhorn and (particularly) bassoon.

What, you might reasonably ask, does one perform with a line-up like that? This is, again, where conventional genre labels rather fall down for Gryphon. They are rather like the folk-rock concept applied to medieval and Renaissance music – particularly instrumental dance pieces. About two-thirds of their set was instrumental. The songs I think all involved original musical composition, with either also-original words or the text appropriated from folk songs. Of the instrumental pieces, several were derived from traditional, anonymous or known-composer old pieces; but even those were re-arranged into the band’s distinctive idiom: challenging, complex (they must have had a different solution to knowing their parts in the 1970s, as all of them had iPads with notes in front of them this time!) but also energetic and performed with great energy as well as musicianship. Probably slightly more instrumentals were original compositions, often of a length, multi-sectionality and uninterrupted diversity unashamedly ‘prog’. What was notably absent were the guitar-centric strophic original songs of post-Dylan folk-rock, and the folk tunes as we know them (the jigs, reels etc of the Irish, Morris and so on traditions) incorporated into the Fairport stream of the genre.

A good, if extreme example, of Gryphon’s musical personality was the closing number of their first half. Ostensibly an arrangement of a medieval English ‘Estampies’ (some kind of high-energy dance form), this contained a very extended bassoon solo in the middle, accompanied only by drums. I noted in passing quotes from the Rite of Spring, the ‘shave and a haircut – brown bread’ ending tag, Glenn Miller’s ‘Chattanooga Choo-Choo’ and the James Bond theme music; I am assured by those who were not just alive but old enough to take notice at the time that most of the rest was a tissue of references to 1970s TV sig music of many sorts.

The audience response proved one thing above all I think, something which many musicians might take note of: you can deliver apparently inaccessible, bizarre and even wilfully hard-to-understand music and get a fervent audience reaction, if you deliver it with musicianship and conviction, coupled with good humour and an infectious understanding of the music’s intentions.

Although, if your music formed a significant part of most of the audience’s adolescence, that probably helps too …

« Laying it down
Some serious action »