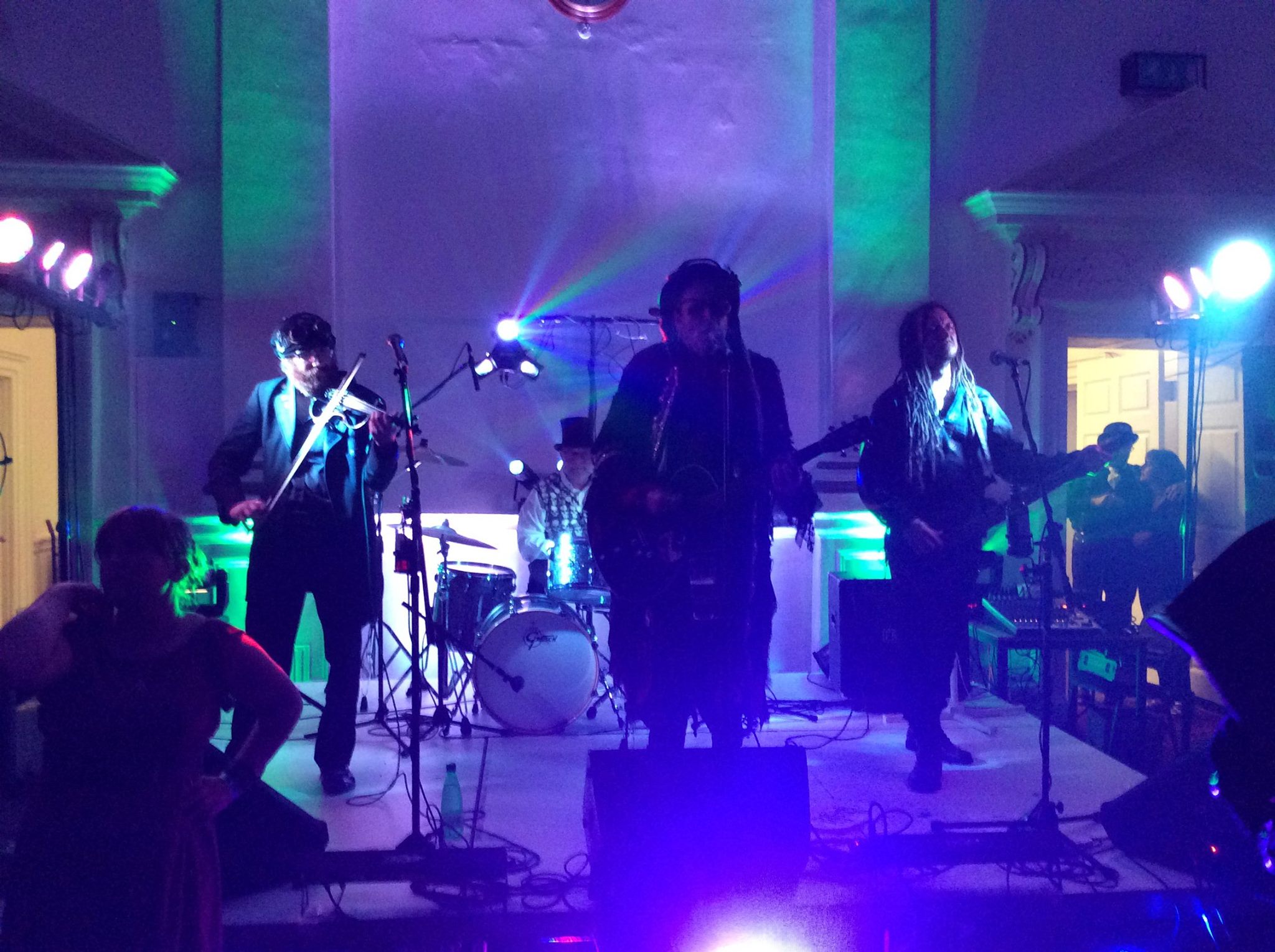 Asylum remains, of course, the biggest steampunk event in the world. The new idea went down so well that the same concept was upgraded from a primary school hall to the Lincoln County Assembly Rooms, a US-based band flown in to take the second slot, and even in somewhere as big as this the whole thing was sold out weeks beforehand: 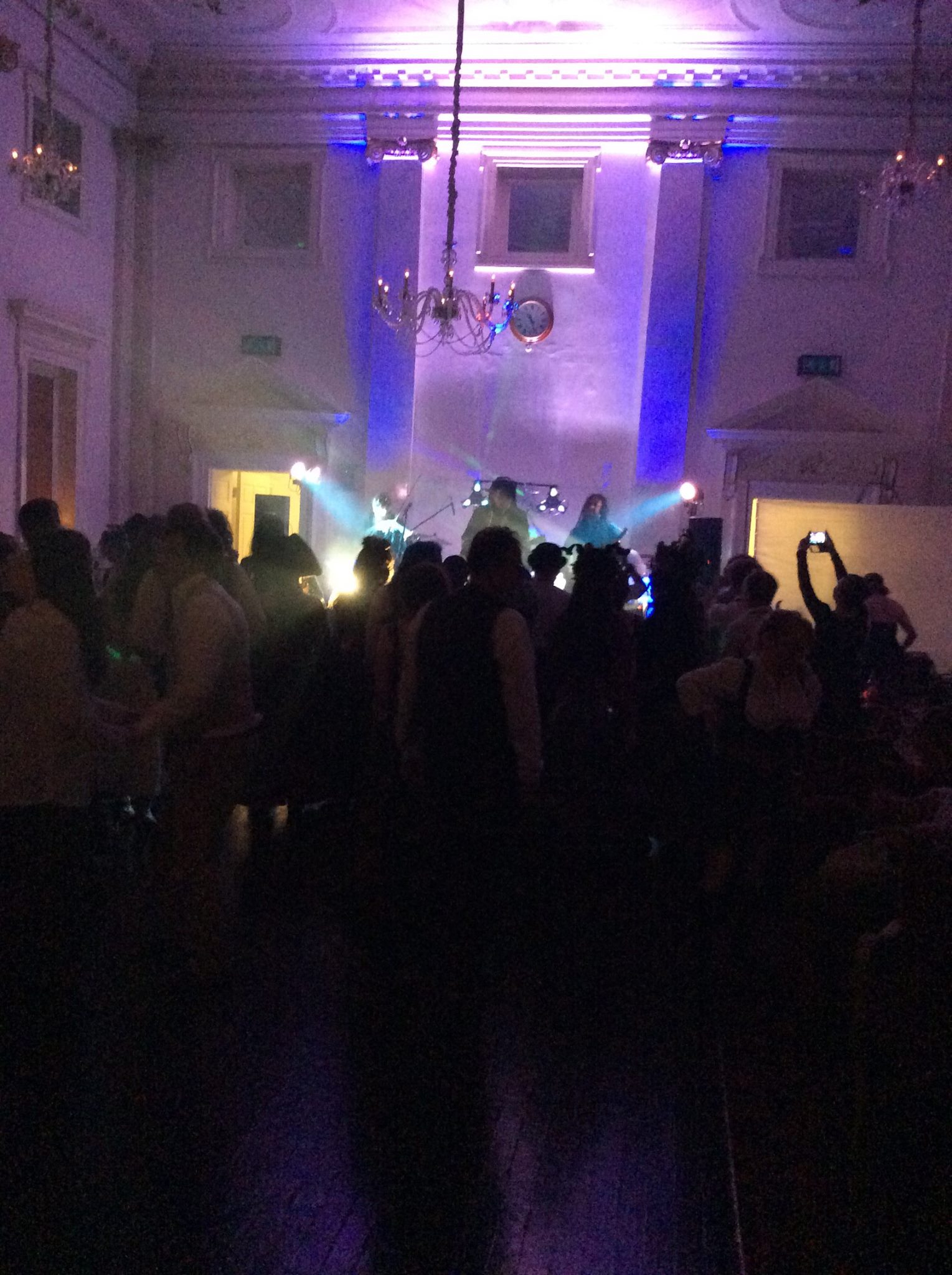 Meanwhile the band have gained so much prominence in the last year that we still got asked to headline the upgraded event.

I’ve been known to be a little sniffy about steampunk crowds when playing with rock bands (‘dressing up for grown ups’; ‘lots of sitting down drinking tea in expensive costumes, not much dancing’). I have to take it all back for the Steerage Ball.

Opening act Captain of the Lost Waves proved you don’t need big beats and yelling to get a crowd engaged, attentive and participating, basing his act instead on surreal-science fiction storytelling, a troubadour roving performance style with bouzouki, ukelele and a headset mike letting him play and sing from anywhere (including, literally, the back row) and vocal acrobatics that could have got him into opera if he’d wanted. He’ll go far on the steampunk circuit.

Frenchy and the Punk really got the party going though. The two of them took a lot longer than the four of us to set up, and had a correspondingly massive sound, built up with two big percussion rigs (one of their numbers sounded like a samba band most of the way through), synth drum pad, vocal effects, guitar and loop station. The energy of their set was overwhelming and irresistible.

I’m not going to try and review our set (though it was another resounding success for the new electric violin – I think we just need a stooge in every sound check to stand in the middle of the room and prompt for me to be turned up above rhythm guitar … benefits of band wives that come to gigs). This was a fantastically responsive crowd though. We finally got we asked for with Drinkski Song – in fact got it about nine songs early, as highly skilled Cossack dancing kicked off in our opening number. Turns out the bloke is in fact Russian, and disarmingly modest about his abilities he was too. Through most of the set we had a pretty full dancefloor, and they even responded to between-song banter. Seems (some) steampunks can let their hair down after all.

The trick may be to have two evening music events to choose from – Newgate novel / penny dreadful or Henry James, depending on your preferred style of Victoriana. Asylum had done this on the same night, and Steampunk Wales did the same on consecutive nights a few weeks back. The Filthy Spectacula’s next outing, Steaminster this Saturday, aren’t running a big enough event to justify that, but looking at the line-up they seem to be running a tea and fabulousness daytime programme and an evening of debauchery. Spread the word steampunks – you can do dirty dancing in a corset or a silk waistcoat … especially to us!

« Out and about
Meet the new Boss »