From starting to busk as an income top-up before leaving Oxford, to early this summer, an acoustic violin and a pair of stomp-ready heavy-soled boots had sufficed me as busking equipment. (I experimented with singing and playing mandolin and dropped them again as it seemed most people weren’t likely to pay me for the trouble, though as discussed in the previous post my mandolin is a lot better now than then, so I could revisit that at some point.)

However, eventually the weight of unsolicited advice and in effect peer pressure from the other buskers I saw and heard around London led to me feeling I needed a better armoury on a couple of different fronts. Enter the new kit: 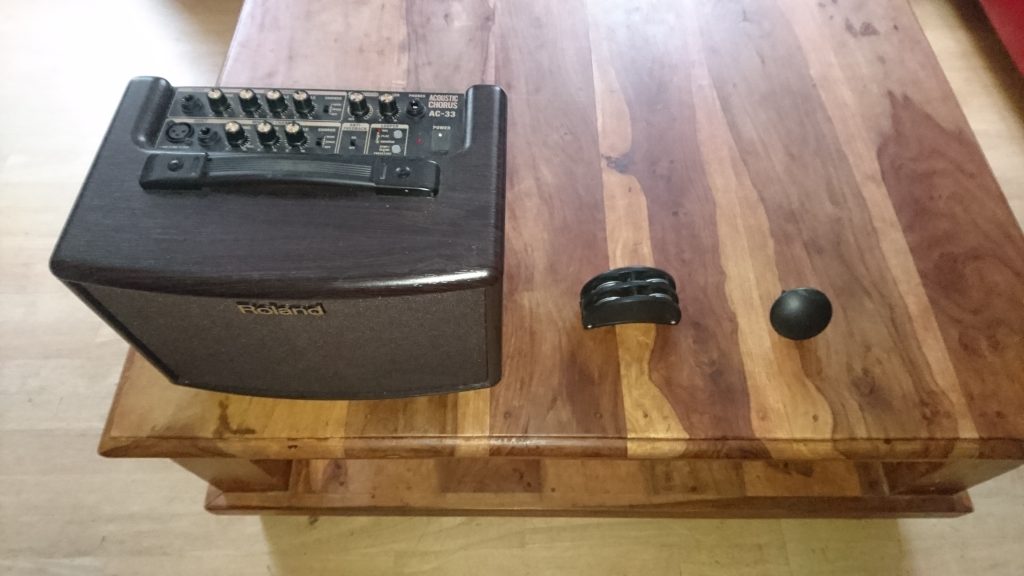 The most ‘obvious’ decision (but also the one I made later) was to amp up. Acoustic buskers are a rare sight indeed in London these days, even if this may have something to do with the quietness of the (not operatically trained!) human voice and the guitar unamplified (I can punch acoustic violin a little harder), and the frequent use of backing tracks or loop units. I wouldn’t necessarily want to use the electric violin for busking, for various reasons, but having the Fishman bridge pickup on the acoustic means I don’t have to make that choice – and if the batteries go flat in the amp, I can still play! Until recently, the Victoria station pitch required unamplified buskers – but is apparently now being suspended pending negotiations and will permit amplification when reinstated, leaving really no reason not to get used to using the amp whenever I’m busking.

The Roland AC-33 was a classic among buskers and indeed small-gig singer-guitarists in Oxford when I lived there. I think Roland continue to gradually add more bells and whistles, but the underlying principles remain the same: you get an instrument channel and a mike one, with level and EQ controls, it will run off a mains adaptor or a rack of 8 AA batteries, and two speakers are fed at a notional 33-watt power, plus there is an aux in (for, for instance, backing tracks) and a line out (for connecting through to a PA at gigs in a real sense of the word). The whole thing is less than a foot wide with depth and height smaller still, though it still weighs enough to be a pain (though perfectly practical) to walk a mile with!

My big surprise with it has been how powerful, and how directional, it is. With it set up pretty much in front of me, angled slightly upwards on the built-in folding stand, I can barely hear the amp over the acoustic sound of the violin under my chin. However, genuinely outdoors and amid the hubbub of Camden Lock Market, it still produced enough noise for those in front of it to ask me to turn it down a couple of times in succession. What I’ve settled on as a perfectly adequate setting is having the master volume at half and the instrument channel (admittedly the level on the Fishman pickup is quite high) at a little less than half.

I’ve had the amp with me at a couple of slightly annoyingly out of the way busking pitches where I’d found myself rather comprehensively ignored acoustically, and it certainly helps the sound ‘reach out’ of corners and be noticed (and enjoyed!) further across a noisy and acoustically awkward space – I can literally see people waving their hands to a beat, looking over at me or mock-dancing further away than before!

And what about those backing tracks, or looping (there’s a built-in loop function in this version of the amp, though I’d need a controller pedal for it to use it with any practicality)? Well, not for now at least. I seriously dislike the inflexibility and unresponsiveness of playing to tracks, an objection which also applies when the track is a passage I’ve just played, except that live loops are either to knock on the head or replace with another attempt. Equally, with the exception of a couple of classical pieces where I could probably get tracks near enough matching what I do now, I would have to build a new repertoire around playing over tracks or loop composition (a significantly different art to putting together any other kind of music, I do not joke). At present, I prefer to keep everything uncomplicatedly live.

However, the dimensions of what I can do without recording or playback are somewhat expanded by the other new additions, coming specifically from a fellow-busker’s suggestion that the fiddle dance tunes in my repertoire would gain from some percussive support. The straightforward addition is the foot tambourine, which does exactly what you’d expect – strap it around the arch of my foot and every time I tap my toe I get a fairly sharply-defined jangle. This is quite adaptable within its constraints – while the basic option (and the one I use most) is simply to bash it on each main beat, it is also possible to drop it in and out for variation, use it for stops or imply a phrase-end build-up by going double-tempo, or even play on off-beats instead of on. A lot depends on how much multi-tasking my brain is feeling capable of! Sadly, it will only really do ‘crash’ (though substantial dynamic control is possible) – efforts to rotate or wiggle my ankle with my foot off the floor in order to imitate the classic gospel shake-and-windmill tambourine roll haven’t really paid off yet. But it certainly adds extra punch to the fiddle tunes, points up speeding up, and is usefully controllable as a time-keeper.

Slightly more questionable is the finger shaker (though I’m still using it and haven’t yet had anyone say it sounds bad). These fit on one finger like an oversize ring, and the flying saucer-shaped shaker inhabits the same sort of sound area as the egg shakers so beloved of non-guitar-playing folk singers. The intended use is that people playing hand drums (djembe, congas, etc.) put one on each hand for extra definition and cutting edge in the same rhythm they are playing. I’ve been putting one on my right (bowing) hand – after some experimentation, on my thumb, as it seems to get in the way of holding the bow least there. Strictly only for rhythmic numbers where folk-style bowing (down bows on down beats at pretty much all costs – an approach which I think is perfectly valid for art music up to about Beethoven, but can attract some funny looks from players trained fairly exclusively in the Romantic style) means it rattling on each bow change and string crossing lines up pretty well with the main beat, with few enough extra sounds to be interesting. As those who have tried the shaky egg will know, however, getting a coherent rhythm from the innocent-looking items is nowhere as near child’s play as would appear. One ‘shake’ (move and then stop sharply) throws whatever is inside against the front of the shaker, producing a noise; but if that is all you do, the contents then fall back and produce another one. Hence why people who are any good at it base everything on variations (for emphasis) of a constant back-and-forth rhythm. The risk with shaker on fiddle bow hand is that with slower bow changes (say, a tune played with a lot of slurs) and particularly if there is less other noise (from a foot tambourine, perhaps!) going on, there is an audible behind-the-beat extra ‘shk’ that only really serves to confuse the beat, as if there was a percussionist using poorly-judged digital delays (an effect of which I’m no fan, sorry 80s music lovers). However, in general I think it comes out ahead on giving a thicker, busier sound that is less solo violin and more one man band (though you won’t catch me playing bass drum with my elbows and strapping a pair of cymbals to my ankles any time soon).

Of course, the real question is, are they worth it as investments? Few if any people are ever going to judge busking, particularly folk-heavy busking, as art … certainly not me judging myself. Well the minor cost of getting the percussion certainly is paying off in extra ear-grabbing ability and extra accessibility to a casual audience largely unaccustomed to encountering rhythmic music (or much music at all) without some kind of drum beat. The much higher cost of the Roland amp will certainly take longer to pay back, and it is always difficult to assess average increased earnings from a change when so many other factors, from the national economy to the weather to the time of the day, week or month, are in play, but by extrapolation from definitely being heard more playing through it, it should be upping how much I’m tipped as well.

So hopefully, busking gear taking busking up a gear. We shall see.