Now, who can tell me what this is? 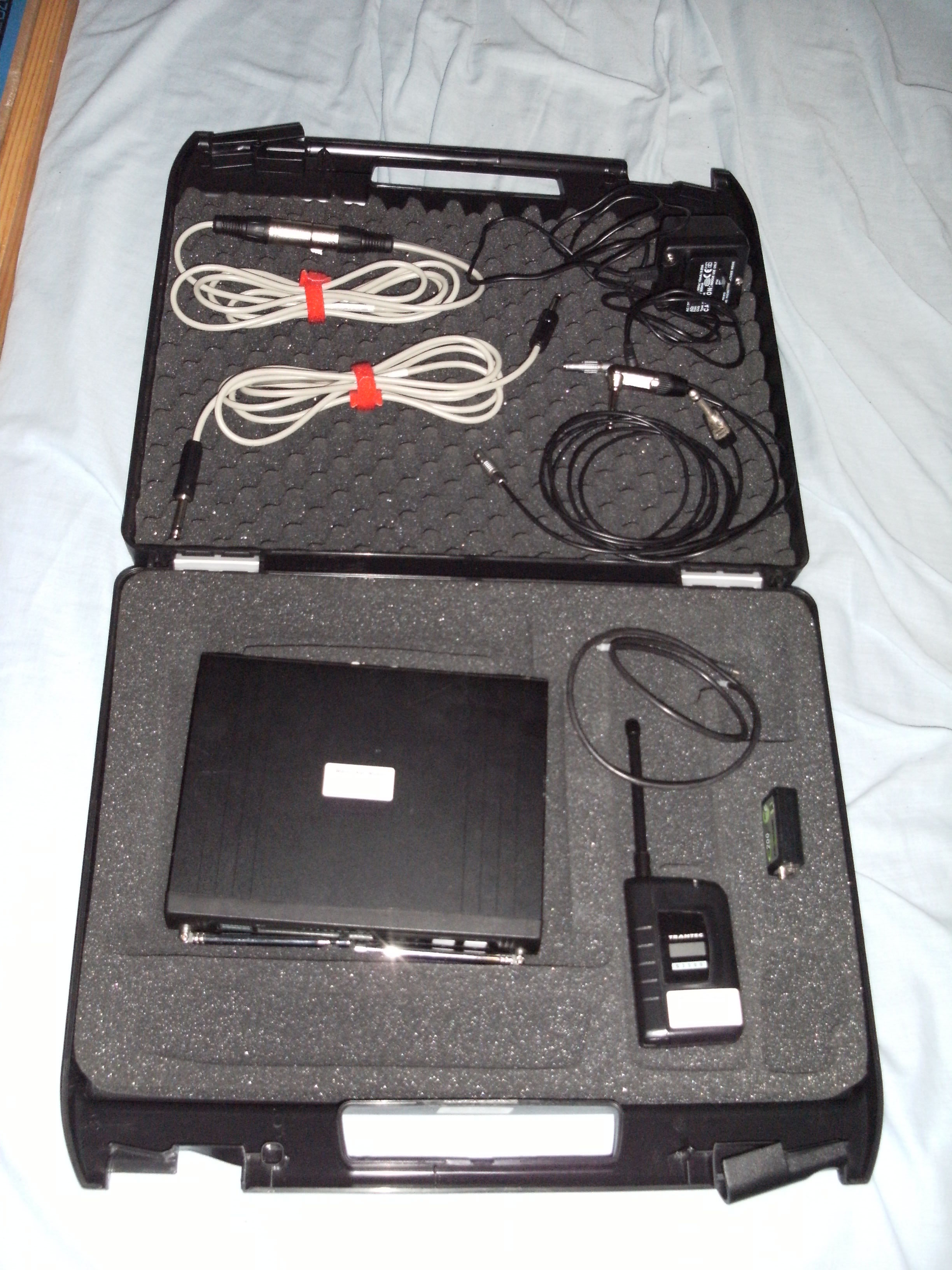 There’s a technical answer of course (that’s a Trantec Systems S3500, plus a couple of extra leads). And there happens to be a social one too (that’s my Christmas present from my brother. Thank you Richard!).

But from a musician or rather performer perspective, as first employed in a fully amplified rehearsal Saturday gone, this is freedom.

Freedom having to be attached to a 30-foot leash whenever I’m playing amplified – a dog-lead that is very inextendible and rather given to getting and staying wrapped around every obstacle it can possibly find, and that will yank my instrument out of my hands rather than pull out (the socket on my electric violin is surprisingly tight).

Freedom not just to go further from where I’m connected to the PA, but perhaps more importantly to simply move freely without cables snarling up my ankles, and like as not getting tied up with the cable of another instrumentalist so we end up doing something between a maypole dance and musical Twister.

All of this can seem very techie and modern – using a belt pack and a radio receiver that needs mains power essentially to replace a piece of wire. It might even smack (as perhaps the most tongue-in-cheek of my wandering through the crowd soloing antics have done, and will do) of classic rock-n-roll excess, a somewhat Spinal Tap desire to push the kit ever further whether or not there is any musical substance behind it (and I do remember that wireless kits are discussed (in context of lead guitar gear) in one scene of Spinal Tap).

But actually I think this is a step forward that takes me back towards my roots.

Whatever else you might dispute about where my roots lie, they definitely sit with acoustic music and playing acoustically. I didn’t start using amplified instruments on a regular basis until I’d been playing for a good 15 years or more. And one of the things I miss about that when I’m playing amped up gigs is freedom of movement. Having to play into a microphone is probably the worst, because even when sat down in an orchestral concert I will move the instrument around quite a lot (and a lot more if I’m leading a section, as is fairly conventional). But unless balance and the acoustics of the space are a really significant issue, you can also play acoustically from anywhere in the room – and while moving around it. To date, my most elaborately mobile performances have been true acoustic ones, in a folk or gigging context without sheet music, where I could use the whole room uninhibited if I wanted.

To this day, I rarely pay much practical heed to the need to stay in front of ‘my’ monitor to get the right foldback mix in a setup with wedges. I’m more likely to use my position on the stage plan as a starting point, and the place where I change effects (in Kindred Spirit gigs where I use them significantly) and do backing vocals (and, at Filthy Spectacula gigs, stage banter). (I think a Britney mike and another belt pack might genuinely be too much, especially as many Kindred Spirit gigs also involve in-ear monitors with a wireless belt pack receiver of their own.)

In that sense then, ditching the wire is a move back towards pre-1950s performance modes and traditions (though there will be the disjunction that wherever I play from, the sound will come out of the front of house speakers. Something which big gig crowds seem remarkably used to). However, I think we can still assume that the most-noticed and most memorable consequence of it will be even freer roaming around and off stage during solos, jams and playouts, even if I think it’s as much about not worrying about tripping over …