Yesterday’s post brought me up to my last pro gig before Christmas. (I shall forebear to write at length about playing for fun at Christmas carol services at my own church (on the same day as the second Euston job, but in a pub function barn) and upcoming at my mum’s church on Christmas Eve and Christmas morning.) But by combining the two Chapel of Life events, I skipped over one more important write-up before I knock off for Christmas (coming back, of course, not quite in 2018 as I still have a new year’s gig to play). In other words: up yours chronology, go thematic organisation yeah! 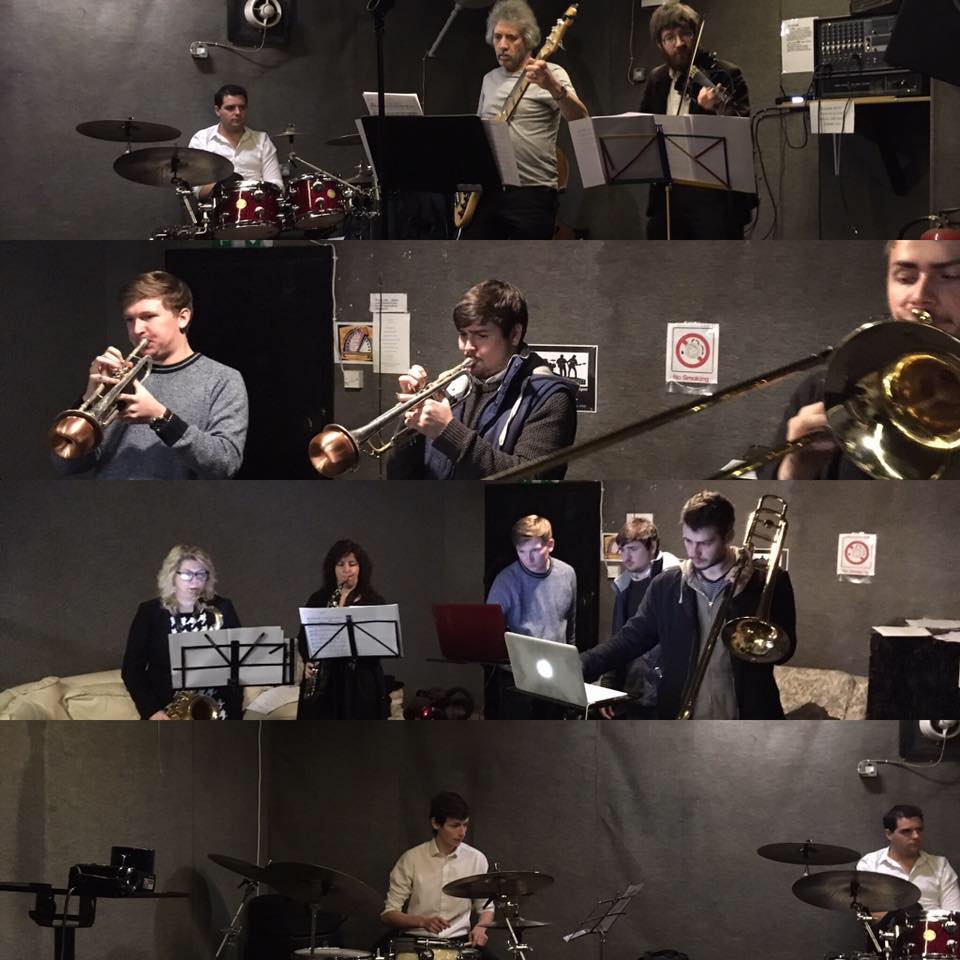 What was I doing in a somewhat chilly large rehearsal room near Upminster on Monday 12 December? Well, that requires a bit of backstory.

Allow me to introduce Joe Fryd. Joe is an almost insultingly good-looking working dad and ex-copper from Essex who has built up a very good business for himself over the last few years singing swing / Rat Pack / crooner / etc. material for classy end functions, essentially as a solo singer with backing tracks. And I do mean a very good business in terms of frequency of booking and actually making a decent living at it with relatively little ‘other work’ on the side.

From that position of dealing with substantial-budget corporate, wedding, agency, etc. clients, the next step Joe both wants to take artistically and thinks is a viable business plan is to do some gigs ditching the tracks and instead bringing in a full live band.

And being that sort of guy, he isn’t going to sit around waiting for that to happen, he’s going to tap musicians he knows and get them to tap other players they know and pull something together sooner rather than later, because everything comes to him who hustles while he waits (according to Edison). I don’t know how he got hold of my oft-time freelance colleague Graeme Hollingdale (someone I mostly know as a classical double bassist), but he did, and Graeme very kindly put me forward for the planned violin chair.

Enter the Downtown Funk. This was the first time of getting actual people in a room to play music and talk plans, and it wasn’t clear to me from email discussion in advance whether we really had a solid basis to make it gel or not. I had put together violin parts for a handful of vocal swing standards to give a live hint of the string sections added to big bands favoured by Bublé et al; I knew we were looking at reduced horns compared to the original (very) big band orchestrations; that was about it.

Actually I think we all walked away thinking this is a project that will go places. Partly because Joe has the energy, people skills and marketing ability to make what we wants happen commercially. But just as much because, even with keys and/or guitar chairs empty (this will be soon fixed) and playing mostly straight off stock charts that would work better with a little doctoring to the specific line-up, it worked musically. That chilly converted farm outhouse swung, with the combination of energy, freedom and precision that is the demanding tightrope of successful big band jazz (believe me, I have heard just as good arrangements be wooden and lifeless, or sloppy and slack). And I’m confident that, when we start varying the swing with soul and funk, that will be just as taut. What we really need is audiences to reflect some of that energy back.

So I’m moderately confident that, barring unforeseeable accidents and acts of God, 2017 should see me playing some events that I almost certainly could never afford to get into, for fees and with a class of ensemble that will make a significant difference to my musical working life.

But, before I get carried away with hypotheticals, I do have one gig left before the Great Working Musicians’ Desert of January (seriously, this is when all the musos tighten their belts, because the punters have massive credit card debt / accumulated hangovers / new year’s resolutions to go to the gym instead of licensed venues):
Kindred Spirit Duo play 2016 out and 2017 in at the Fish in Sutton Courtenay, with a full 2 hours of live music alongside Michelin guide listed cuisine and appropriately late opening. See you there for the last gig of the year, and the first of the next!