Last night (Tuesday), I shared a stage with Star Wars referencing dance troupe Boogie Storm, comedian Jo Caulfield and the winners of the construction industry’s annual awards bash. Wondering what I was doing there yet? Yeah, me too some of the time … 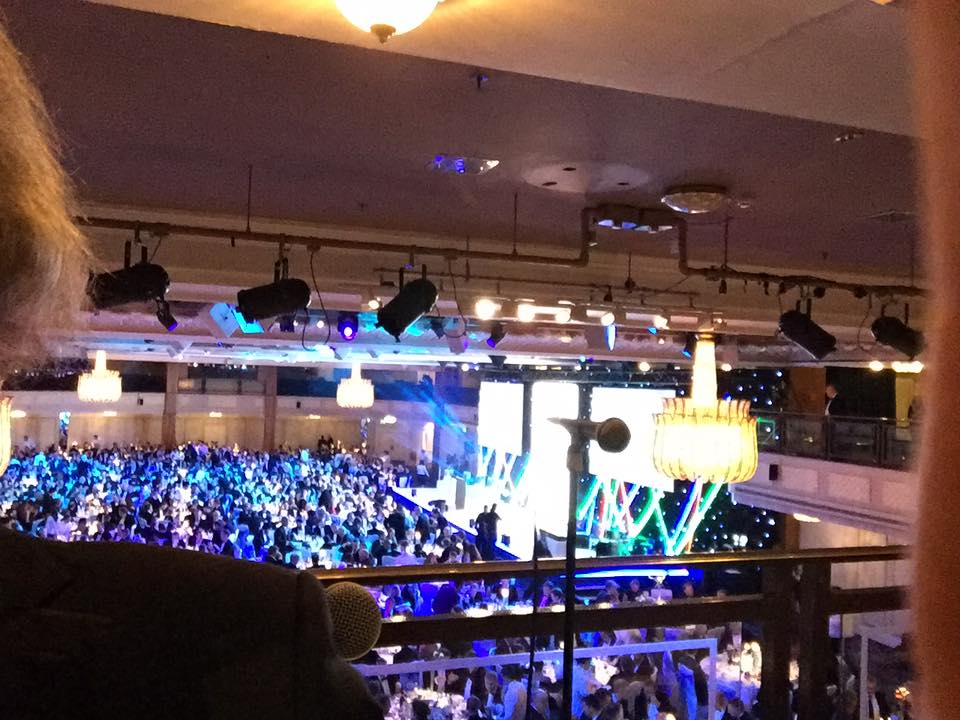 To be strictly accurate, I was never on the stage in the Great Room of Park Lane’s (to my plebeian eyes) insanely plush Grosvenor House Hotel. But the above-mentioned and others did share the attention of round about 1200 construction industry movers and shakers (maybe that’s a badly chosen phrase, thinking about it).

I was depping in the first violins with the Collaborative Orchestra, who were supplying a carefully unforeshadowed flashmob-style performance between dessert and the actual awards presentation. If you saw their first Britain’s Got Talent appearance (I’ve watched the YouTube version – professional research … ) then you have a reasonable impression of what was involved.

It’s tempting to say the most difficult thing involved was getting eight violin cases concealed under a dining table, then being able to whip them all out again set up to play in a few bars of introduction. Either that or, in my case, trying to deliver the essence of the Martin Ash rock violin stage manner in a very crowded dining room without shoving my bow in some unfortunate guest’s eye (slightly to my regret, I was told not to stand on my chair, perhaps because that stunt could hardly be matched by my female colleagues in heels and cocktail dresses) – the brief was to blend into a backing track and to look like we were having fun as much as worry about projecting sound, so I used my usual toolkit! (not a very classical/  orchestral one it would have to be said – in the course of two rehearsals and performance I managed to become known to the orchestra as ‘the dancing violin dep’ … )

I haven’t done a gig with such a high ratio of rehearsal time to performance, let alone waiting around to playing of any kind, in a long time. However, the audience response and the pay scale were more in line with the total work put in than the under four minutes of the performance; and getting to slot in as a guest to a black-tie dinner costing (apparently) some £300 a head to regular attendees isn’t a bad perk … What better was I going to do with my Tuesday night?

Rather more familiar territory, material and company this Friday, as the Kindred Spirit duo show up back at the Hope in Richmond. Much more music too, and I assure you it will all be raw live (albeit amplified and in places effects-processed). We do have company on ‘stage’ though, with eminent support from the Michele Osten Duo. And it should cost about £300 less to get in!