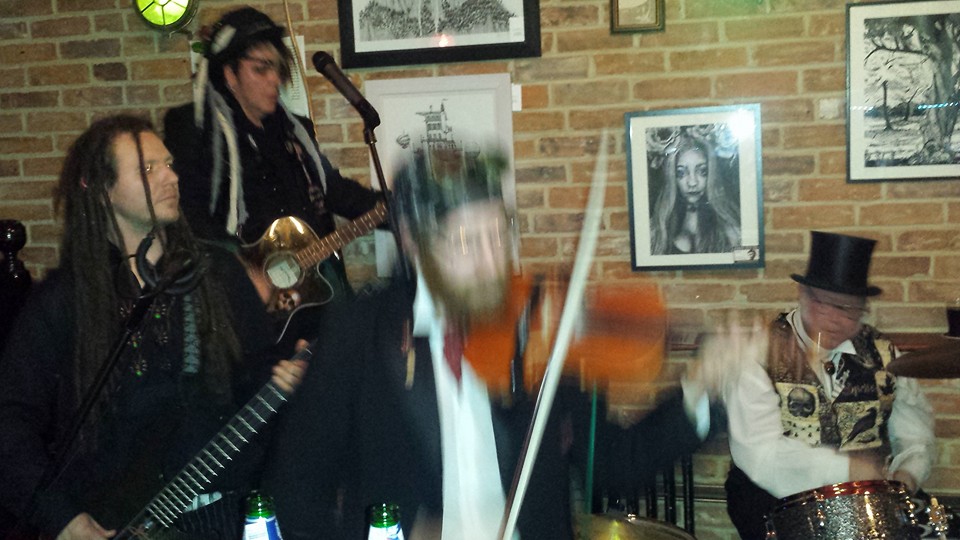 Somehow this sums up last night’s Filthy Spectacula gig at the Yellow Book in Brighton.

The photo doesn’t come close to doing justice to how much the place looks like a cross between a Bram Stoker character’s living room and the interior of Jules Verne’s Nautilus. Nor does it let you realise quite how little room there was, although I can tell you the shot was taken from behind the bar and those two bottles of lager peeping into the frame are on top of it. We were playing in a corner of the floor (well, Mr. E was partway up some steps – he isn’t that tall) and I was often closer to some of the audience, or indeed the bar staff, than the rest of the band. Which is an improvement for my health chances I think. When someone wanted to get past between the band and the end of the bar I had to curb my dancing-while-playing and retreat more or less on top of Lord Harold’s drums.

This was a very DIY gig in a very small space well off our beaten track. And as we watched the rain stream down earlier in the evening we had serious doubts about how it was going to go.

We needn’t have worried. By the time we took to the ‘stage’, er, corner, Brighton’s faithful, steampunk geared up and not, had crowded in in what felt like dangerous numbers (like I say, the Yellow Book is very small!). By the time we finished, the atmosphere was hot, sweaty and hyperactive and the masses were putting more into our music than we were. So much so that we ended our set and did an encore. And then got called back to the stage by what sounded like the whole bar chanting the knees-up ending tag (reprised at the end of encores) to set opener ‘World Famous Extravaganza’. And did the whole song again. And stretched out the ending. And sold merch and posed for selfies and accepted extravagant compliments from violin-playing young women (er might have been just me) … and vodka -soaked cherries from the landlady …

Brighton we salute you! We will be back! (First on 5 June – google ‘End Times Festival’ and put it in your iCalendars … )

« Dressing up
What the pundits said »