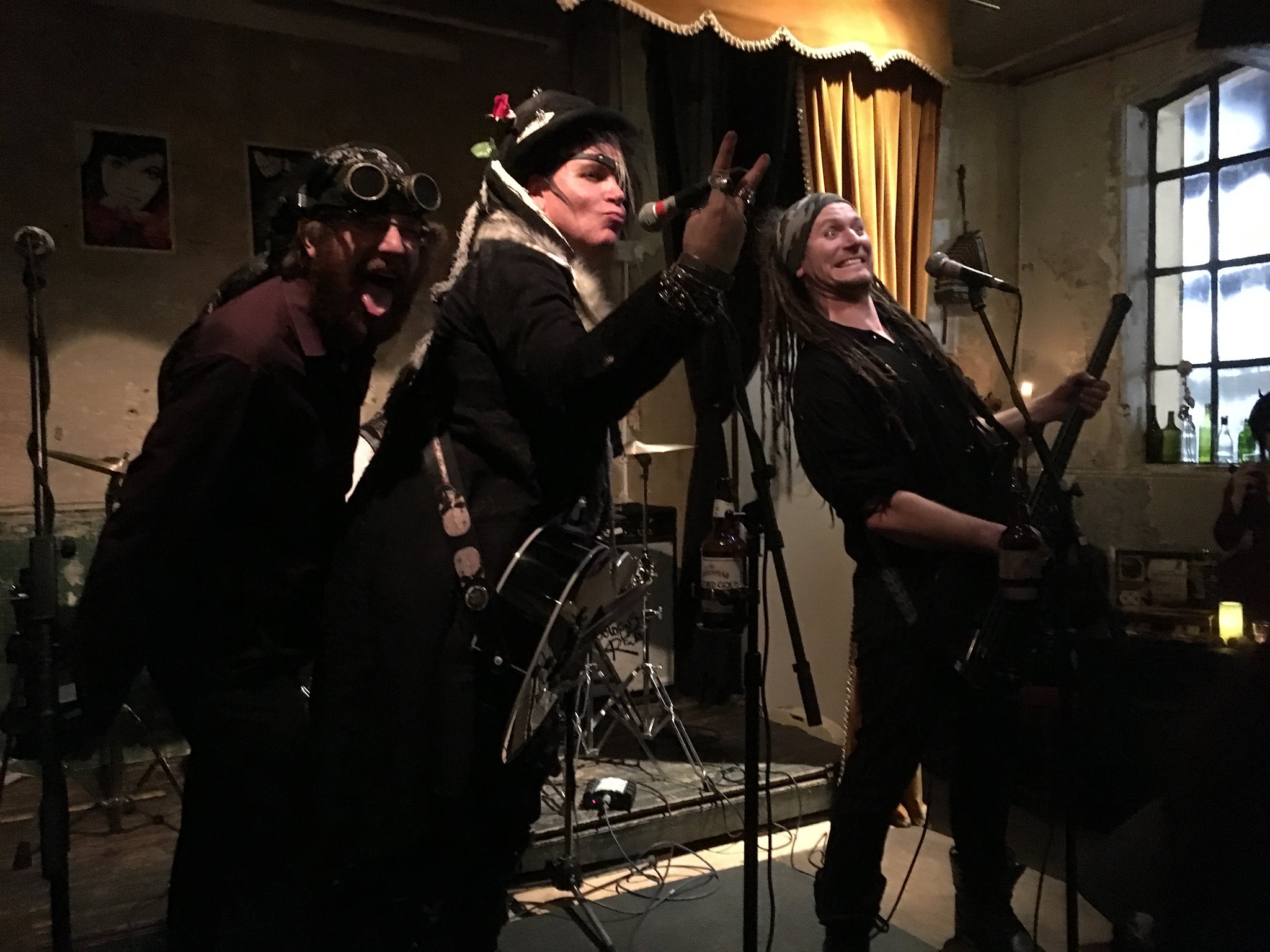 You might not really have noticed The Filthy Spectacula had been away. But it was a couple of months, and a lot of album work and non-performing admin, since we were last on a stage when we headlined Jamboree on Saturday. And it felt like a bit of a comeback.

We’ve played there before, last summer, in scorching heat that meant everyone was sweating before we even got on the stage. And I’m starting to get the hang of some of the distinctive things about the place – besides the Old Curiosity Shop-meets-opium den décor, location inside a gated industrial estate in Limehouse and colourful accent collection of the staff.

Most venues that make any effort with their programming (many do not) try and line up acts that do similar things to each other, and put them in ascending order of quality. So acts with a comic-vintage, ska-punk, gypsy or just plain alcohol-adoring tendency are likely as Filthy supports.

Jamboree plan their bills to shift over the evening, and they seem to know their clientele. So their support acts are usually duos, trios or even solo acts, with semi-acoustic instrumentation and a leaning towards the folk-roots-throwback field. On this occasion, the wonderfully laid-back and genre-unconcerned Dai & the Ramblers (just one Rambler for this gig, making them a guitar and fiddle duo), meandering casually from blues to jazz to Celtic folk to unexpected a cappella spiritual. They had a respectable audience of about 40 to 50, who sat down, listened attentively, tried to only come in and out of the loo between numbers, and  occasionally drummed on their knees (OK, that might have been mostly me). A good setting for their act, and an appropriate response. I enjoyed them.

In the half-hour or so after they finished, a lot more swarthy 20-somethings, dressed not very conventionally for a London night out, showed up and started ordering drinks in much more rapid succession. The venue, without doing anything except let people in, transformed from folk club to v. alt rock cellar. By the time we took to the stage at quarter to eleven (usually what even we would think a bit of a late start for a semi-pub gig), there must have been more like 150 boozy uninhibited oddballs, willing to pogo, sashay, Cossack dance, chorus line and yell their way through as long a set as we could give them. Quite literally – the sound guy announced to us after Dai finished that they had a late licence till 2, so could we just stretch our set out? Till, maybe, 1am? We didn’t manage that, but we did play over 90 minutes straight, missing out just one song of our repertoire (unless we forgot anything scribbling extra titles on the set list). Not bad for an originals band.

This was also the gig where the crowd starting asking for selfies. Quite a lot of them. What it is to be famous. We should start charging. And we should follow up the girl that was considering hiring us to play at her wedding …