The String Project were in the studio on Friday night, for the first time in a while (it must be at least two years I think), at least of doing full-blown recordings rather than filming and recording live-in-studio performances. We were doing full takes (likely to be spliced and edited) of an instrumental from the slightly more ‘art music’ Ben Mowat composition era, and laying down rhythm tracks for a more recent song to have string and voice overdubs added soon.

I’ve always hugely preferred performance to recording. Some musicians thrive on the perfection, the being able to correct mistakes individually (especially in the digital era), and the creation of a lasting artefact. However little this might be true of my life and my practised philosophy in general, as a musician I live in the moment and practically survive on interaction with fellow musicians and audience (possibly the main reason I hate playing auditions by myself to poker-faced examiners).

All of which said, I think Friday’s was a good session and maybe I’m getting over my distaste for the studio! It helps a lot to be familiar with the material (which I’ve been gigging with this band for a couple of years by now), and to be in a group largely similarly familiar – massive thanks though to my once and future freelance colleague Judith Malonda for stepping in to cover the viola part on a couple of days’ notice, and doing so extremely well! I’m certainly confident that a bit of editing (and of the old-fashioned cut-and-splice variety, I don’t think we’ll need much if any timing adjustment or autotune) will give us a good version of Maybe Epic Soon, and I hope to be able to overdub some violin onto The Unquiet Grave soon too. For recording mostly being done in a live room, with therefore spill from everything onto everything else, either everyone gets it right or everyone has to do it again, that’s very good going in an evening (perhaps especially a Friday evening given most of us have day jobs of one kind or another!).

The String Project record story is an ongoing one – we hope to finish some other part-recorded tracks and release something fairly representative of our current live performances with the next month or two, but there may well be a separate collection slanted towards crossover instrumentals by Ben in the pipeline for not long after that. Watch this space, it’s an exciting time!

Last weekend was a busy one – it’s not just in terms of blog posts that I’m still catching up halfway through this week! 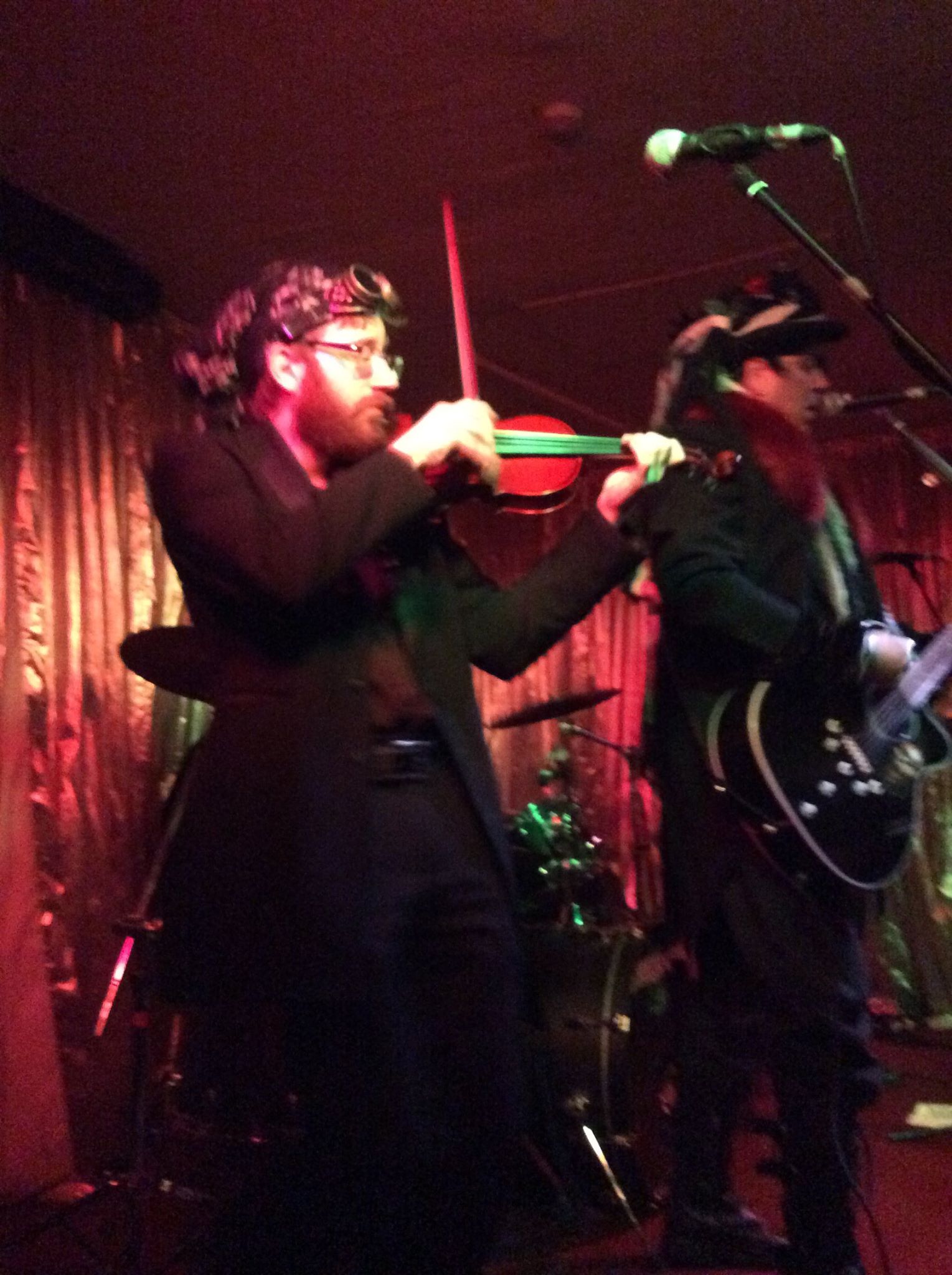 Saturday night (yes, just a few hours after my previous gig in a different city!) was the last Filthy Spectacula gig of the year, at the Fox and Firkin in Lewisham.

We had an unusually well-matched support act in the shape of Brighton’s Edwardian goth-punks The Iron Boot Scrapers. They have violin, cigar-box guitar and a sousaphone on the bass line; of course I loved them! We will be holding you to the Brighton end of this gig exchange though guys; we have to get in on that scene …

The Fox and its sister venue the Magic Garden in Battersea are unusual among pub-venues; not only for being very cool, having superbly crazy-stylish interior decor, putting live music on at weekends and paying their bands reasonably properly, but also for asking their headline acts for very long sets. As a result, the time we’ve headlined each venue has led to us playing everything we know and putting a bit of time into learning more songs!

This time, that meant a 17-song epic set spanning a good 90 minutes of high-octane rather drunken (chiefly the crowd!) debauched fun. You might even say it was Firkin awesome.

(and the following night I saw Tower of Power in Camden, who were any-adverb-you-like awesome, and they played about the same length set. So I reckon that means we’ve made it)

No, not a new online music project; like almost every other non-acronym piece of digitalspeak, a browser did use to be something else and you can definitely still find them in bookshops, musingly considering the shelves with that tilt of the head from when you have to read a lot of text sideways.

Which (without the tilt of the head) was also where you could find myself and Wulf Forrester-Barker on Saturday afternoon. Blackwell’s, the Oxford original of what is now presumably the UK’s only academic bookshop chain, were reacting to Black Friday with ‘Civilised Saturday’ – less showroom floor brawls over cut-price TVs, instead poetry readings, free mince pies (they had to get more a few times, apparently 120 was nowhere near enough … ) and cultivated background music.

I had been hired for this at less than 48 hours’ notice after negotiations with a couple of string quartets fell through. I wasn’t quite able to pull together a classical chamber group at that notice, or not in Oxford for a maximum budget of £200 anyway.

What I was sure I could do was get someone to play guitar / very sophisticated bass / keys if needs be and jam jazz standards from lead sheets with me; I considered trying for a trio but had to bear in mind I would be travelling back from London for the gig and wasn’t going to pay the others less than I paid myself, which is an interesting set of mathematical constraints. Luckily the flukes of diaries were in my favour and I was able to get my first choice, Wulf and his protean six-string electric bass playing.

Which, spiced with a couple of light classical unaccompanied violin solos, seemed to go down very well. The second location (languages and literature, next to the coffee shop  after a while down in the cavern of all things academic), were a little disenchanted with Cry Me a River – so we upped the groove and got a very good response to Joe Zawinul’s Mercy Mercy Mercy, which I would barely have believed we could get away with in that instrumentation, and the classic Freddie Freeloader off Kind of Blue (double-stop sixths are an underused possibility in jazz violin).

Speaking of underused, off the beaten track specialisations for the unofficial full-length version of my CV: